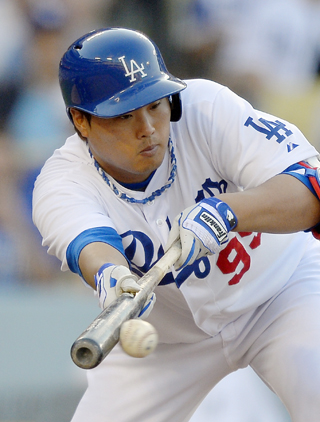 Ryu Hyun-jin lays down a sacrifice bunt against the Miami Marlins on Saturday in Los Angeles. Ryu allowed a run over six and two-thirds innings in the Dodgers’ 7-2 victory. [AP/NEWSIS]

Ryu Hyun-jin of the Los Angeles Dodgers pitched six and two-thirds innings of one-run ball against the Miami Marlins on Saturday as he chalked up his for his fourth victory of the season and helped the Dodgers snap an eight-game losing streak with a 7-1 win.

At Dodger Stadium, Ryu (4-2) scattered three hits over six innings before Miguel Olivo homered in the seventh inning. He surrendered five hits and three walks for his sixth quality start of the season in eight appearances.

Ryu is tied with 12 others for sixth in the National League in wins. The leader is Jordan Zimmermann of the Washington Senators with six.

His ERA dropped from 3.71 to 3.40. It was his second longest outing and most pitches - 114 - of the season. Ryu also helped his team at the plate, recording a sacrifice bunt in the second inning and walking in the fifth inning.

Andre Ethier had a pair of doubles and a season-high four hits, and Dee Gordon homered.

“It feels great to shake hands after a game,” said catcher A.J. Ellis said. “Every win is important, and every win counts. And when you’re in the midst of a losing streak, you definitely want to break out of it as soon as you can.”

“It all starts with one win,” said center fielder Matt Kemp said. “Right now everybody’s having fun, and the kids are laughing and running around in the clubhouse. We missed that. I don’t think anybody wanted to be around kids until they got home because of the way the locker room has been the past week.

“We want to see everybody happy. I think a lot of us looked good at the plate tonight, and I’m just glad we got a win. We’ve just got to keep grinding this thing out and take it game by game.”

“He’s been grinding and working so hard in the cage to get his swing right,” said Ellis. “I was with him today down there with [coaches] Mark McGwire and John Valentin, and they really put a good session in. They had a new plan of attack, and he was able to execute. Those were four great at-bats and four great swings.

“One of the highlights for me as a player is hitting behind Andre at Dodger Stadium and being in the on-deck circle while he’s hitting. It’s such a pretty picture for me to see that open side when he’s squaring the ball up and doing that. It’s fun to watch.”

“We just went in there against him being ready to hit,” said Adrian Gonzalez, who got two hits. “He’s got a sneaky fastball, and we knew it going in from the guys that have already faced him. Don’t let the radar gun fool you. Even though it’s in the 80s to low 90s [in miles per hour], it feels harder. It plays harder. He’s not the kind of guy you want to let get the ball deep on you because it’ll be by you. So you have to treat him like a hard thrower.”

Slowey, who pitched seven scoreless innings of two-hit ball against Philadelphia last weekend, hasn’t won consecutive starts since Sept. 12-18, 2010, with Minnesota. He acknowledged that it was a battle for him.

“There will be those games over the course of the season, and you hope to survive it probably a little better than I did today,” Slowey said. “I made some good pitches that they were able to fight off into the outfield. And when I left the ball over the plate, they hit it pretty well. I had opportunities to get out of some innings and work around some walks. I just have to execute a little better earlier in counts.”

Ethier led off the Dodger second with a double, ending a drought of 30 at-bats between extra-base hits. He advanced on Ellis’ first sacrifice bunt of the season and scored the game’s first run on a broken-bat bloop single by Skip Schumaker.

Gordon led off the third with a drive that just cleared the fence in right-center. It was his second homer in the big leagues and first since May 1, 2012.