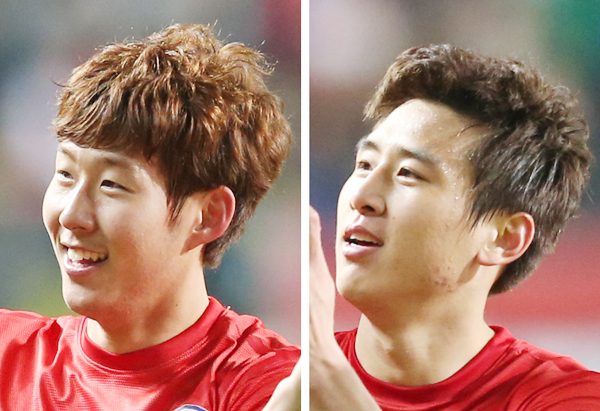 The center of gravity in European football is pivoting toward Germany, which will be highlighted by Saturday’s all-German Champions League final. The same may be true for Europe-based Korean football players.

As the 2012-13 season of the major European leagues wrapped up, Koreans playing in the Bundesliga had a much more productive season than their fellow countrymen in the Premier League.

Son Heung-min of Hamburg SV scored 12 goals in 33 games, becoming the first Korean in 27 years to score double-digit goals per year in Germany since Cha Bum-kun. He is the fourth Korean to reach the feat in Europe. Seol Ki-hyeon scored 13 goals for Belgium’s Anderlecht in the 2002-3 season and Park Chu-young scored 12 goals for AS Monaco in France in the 2010-11 season.

Son was this season’s ninth-leading scorer in the Bundesliga. He also assisted on two goals.

“He has improved a lot compared with last year and has become a very threatening player,” Koo Ja-cheol of Augsburg said yesterday, referring to Son. “He played with fewer errors this year than last year. I think he will do it better.”

Koo himself played a crucial role in Augsburg’s survival in the top flight with three goals and two assists. The Bundesliga team finished in 15th on 33 points, two points clear of the relegation zone.

Ji Dong-won, who joined Koo in Augsburg midway through the season on loan by Premier League side Sunderland, led Augsburg’s rally with five goals.

Across the strait, no Koreans scored a goal this season, including Park Ji-sung, whose Queens Park Rangers finished last and will play in the second-league Championship next season.

Ki Sung-yueng, who moved from Celtic of Scotland to Swansea City in August, recorded only three assists. Yun Suk-young, who joined QPR with fanfare as the 11th Korean Premier Leaguer in the winter, was not called up by QPR manager Harry Redknapp, putting off his English debut to the second division. Kim Bo-kyung will make his Premier League debut as the 12th Korean after helping his team, Cardiff City, get promoted with two goals in the Championship.

The contrast between Koreans in Germany and England is due in part to the differences in roles required of them. In Germany, the Korean players were given key roles, whereas their counterparts in the Premier League settled for assistant roles. Ji, who sat out most of the games with Sunderland early this season, started all of the 17 second-half Bundesliga games.

Koo, who has been loaned by another Bundesliga club, VfL Wolfsburg, said yesterday that he has received an offer from several clubs including ones outside of Germany. But, he made sure that his next move, if he has to make one, will be within the Bundesliga. “Germany is where I have something to show, and I want to show something,” he said.