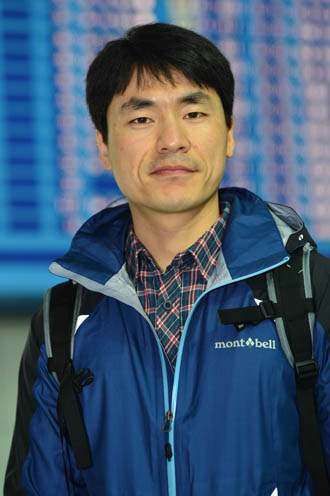 One of four Korean mountaineers returning from a world record expedition to Mount Everest was found dead on Tuesday, according to the Korea Alpine Federation yesterday.

The federation said that Seo Sung-ho, 34, was found dead by his teammates Tuesday morning in a tent at a base camp, about 800 meters (2,624 feet) below the 8,848-meter summit. Seo and three others were on their way down after reaching the top of the world’s highest mountain on Monday morning.

The conquest of Mount Everest on Monday made Kim Chang-ho, the leader of the group, the fastest person in the world to complete expeditions to the peaks of all 14 mountains of the Himalayas that are more than 8,000 meters high.

Previously, only four Koreans have conquered the 14 eight-thousanders.

Kim achieved the feat without the aid of supplemental oxygen, the first successful attempt by a Korean alpinist. Seo also summited Everest on Monday without oxygen, while the other two members, An Chi-young and Jeon Pureuna, carried oxygen tanks with them.

The federation said in a statement that Seo appears to have died of fatigue, but Lee Eui-jae, a director general of the federation, said that lack of oxygen may have been a factor.

“The other team members will tell more once they come down, but it seems not using supplemental oxygen has been a cause, if not the biggest,’” Lee said.

Lee said that the other three climbers arrived at a base camp at 6,400 meters yesterday morning. One Korean alpinist, Oh Young-hoon, and six Sherpas remained in the highest base camp to bring the body back, he said.

Last year, Seo received a decoration from the government recognizing his contributions to the development of mountaineering. Among his achievements was climbing 12 of the eight-thousanders.

The incident, the latest in a series of deaths involving Korean mountaineers in the Himalayas, are causing concern that Korean alpinists may be embarking on too aggressive mountaineering. Korea lost its legendary mountaineer, Park Young-seok, and two fellow climbers when they disappeared on the Annapurna in October 2011.

Some within the local mountaineering community are expressing concern that the local hiking gear industry, which has grown into one of the world’s largest in recent years, are fueling dangerous mountaineering expeditions to use for commercial promotions.

“We heard that climbing without the help of oxygen is considered a significant feat among the mountaineers,” said an official of a local hiking gear manufacturer, which is sponsoring overseas mountaineering projects. The official, however, denied that the company is forcing mountaineers to climb without supplementary oxygen.

Meanwhile, Park Nam-soo, the leader of a group of mountaineers from Gwangju, was found dead at the altitude of 7,900 meters on Kangchenjunga on Tuesday after reaching the summit of the mountain, according to a Gwangju-based alpinists’ association yesterday.

At 8,586 meters, Kanchenjunga, also in the Himalayas, is the world’s third-highest mountain.