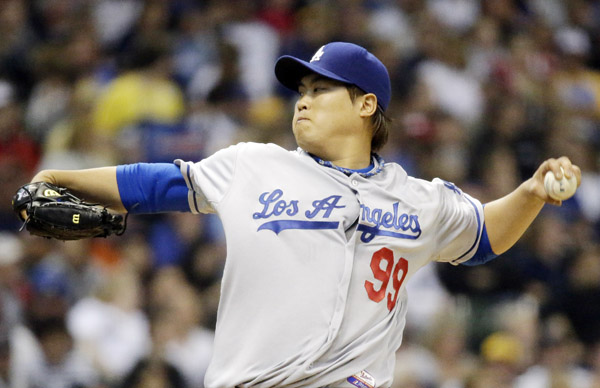 Los Angeles Dodgers starting pitcher Ryu Hyun-Jin’s five wins tie him for the most victories among National League rookies. Ryu has allowed two earned runs or fewer in seven of his 10 appearances. [AP/NEWSIS]

Ryu Hyun-jin earned his fifth victory of the season in his 10th outing on Wednesday, tying him for the most wins among National League rookies with Shelby Miller of the St. Louis Cardinals (5-3, 1.74 ERA).

He expressed satisfaction about the latest win, which is already halfway through his preannounced season goal, but was not carried away by it. When asked after the victory whether he expected to win the rookie of the year award, his answer was flatly “No.”

Before beginning the first year of his six-year, $36 million deal, the 26-year-old left-hander openly expressed hopes of winning at least 10 games and the rookie of the year award.

But, with the team’s struggle on his mind, Ryu is more taciturn about his personal records as he had been with the Hanwha Eagles in Korea.

The Dodgers, last in the NL West, trail the division-leading Colorado Rockies by six games even after Wednesday’s 9-2 win against Milwaukee Brewers, with rumors of the impending sacking of manager Don Mattingly hardly going away.

“I hear about that [the rumors about the Dodgers and the manager],” Ryu (5-2) said after holding the Brewers to two runs on six hits over his season-high seven and one-third innings.

“But there is nothing that I can do about it. I just do my best in the given situation, each game.”

Ryu threw 108 pitches, 70 of them strikes. He struck out four and allowed two walks. His ERA has dropped from 3.42 to 3.30, for which he credited his teammates. “Luckily for me, there were many good defenses today,” he said. “They retired the balls well hit.”

Carl Crawford and Scott Van Slyke drove in two runs each and Ramon Hernandez hit his first home run. Even after the win, the Dodgers’ record is 19-26.

Ryu, who left Wednesday’s game with a 7-1 lead, has allowed two earned runs or fewer in seven of his 10 appearances.

“The team gave me that lead, so I was really comfortable,” Ryu said through an interpreter.

Before the game, Mattingly expressed his unhappiness with the team and benched All-Star right fielder Andre Ethier.

Mattingly, in the third and final year of his contract, discussed his club’s lack of mental toughness and said he wanted a balanced team that has grit and fight.

He benched Ethier for the third time in six games and said he was “putting out my lineup that I feel is going to be the most competitive and going to compete the hardest.”

Ethier was not informed of what his manager said until after the game by a member of the team’s media relations staff, and said he took offense to the comment.

“I’m struggling just like everyone else here to get a grip and get a handle on what’s going on here, and never losing hope of what our main goal is,” Ethier said. “Which is to figure this out and turn things around. And figure out a way to get back on top of this division.”

Asked whether he thought Mattingly would be managing on Friday when the Dodgers open a series against the Cardinals, Ethier said, “Why not? We’re not out of this by far. We’re right there - I don’t mean right there - but we’re close.

“A good run the next month or two could put us right back where we want to be by the All-Star break. We have confidence in everyone in this room and everyone on this staff. Other than the pressure put on this team to perform right away and do what’s it’s done is the reason why these issues are coming up.”

After the game, Mattingly was asked if he was worried about getting fired.

“No, not really,” Mattingly said. “Should I be?

The manager then chuckled, and added, “I’m not worried. Maybe I should be.”

Every position player for Los Angeles except Adrian Gonzalez had at least one hit.

“I’m leaving too many pitches up, right down the middle, up in the zone,” said Peralta after losing his third straight start. “Things are not happening my way.”

Matt Kemp hit a run-scoring single in the first, and Los Angeles sent 11 batters to the plate in a five-run second.

Crawford had a two-run single, and Hernandez came home on an error by shortstop Jean Segura. Peralta then issued consecutive bases-loaded walks to Van Slyke and Nick Punto, his final two batters.