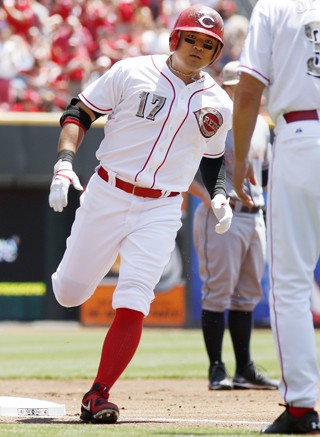 Reds center fielder Choo Shin-soo, left, is congratulated by third base coach Chris Speier, right, after hitting a home run in the first inning of Monday’s game in Cincinnati. It was his 10th home run of the season. [AP/NEWSIS]

Well on his way to surpassing his personal record for home runs in the major leagues, Choo Shin-soo slammed his third lead-off homer of the season against his former team, the Cleveland Indians, on Monday.

In his first at-bat at the Great American Ball Park, the 30-year-old Korean slugger belted the fourth pitch off Indians starter Ubaldo Jimenez for his team-leading 10th homer.

The homer put Choo in a tie for seventh place for the most home runs in the National League, led by Justin Upton of the Atlanta Braves (14). It was the second year in a row that Choo has hit at least 10 home runs. He hit 16 last year.

Choo, who was traded to the Reds by the Indians in December, also scored on Joey Votto’s two-run homer in the eighth that broke a deadlock and gave the Reds 4-2 lead. The game ended in that score, sending the Reds 1.5 games behind the Central Division leader St. Louis Cardinals.

“I just wanted to put the barrel on the ball and at least get a sacrifice fly,” said Votto, who began the day leading the NL in hitting at .353. “It was important to not strike out there or roll over and put the ball on the ground.”

Votto won this interleague game with his ninth homer, tagging left-hander Nick Hagadone (0-1). The reliever was called up from Triple-A earlier in the day when closer Chris Perez was put on the disabled list with a sore right shoulder.

Choo led off the Reds’ eighth with a single and moved around on a passed ball and Zack Cozart’s sacrifice bunt. With the Indians’ infield drawn in, Votto followed with an opposite-field shot into the seats in left, lifting the Reds to their sixth win in their last seven games.

Votto’s homer came with NL RBI leader Brandon Phillips on deck, and followed a conference on the mound. Reds manager Dusty Baker was asked if he was surprised first-year Cleveland manager Terry Francona pitched to Votto instead of perhaps walking him to face Phillips, who’d already hit into one double play in the game.

“I never second-guess the other team’s manager,” Baker said. “You’ve got to take your shot at some point in the game. Votto won that time.”

The conversation dealt with how to approach Votto, Francona said.

“Hagadone has great stuff,” he said. “We wanted to pound Votto inside and not let him get his arms extended. It’s part of the learning experience, but a pitcher also has to pitch to a comfort zone. If we’d have walked him, it wouldn’t have been the end of the world.”

Hagadone refused to blame his inexperience.

“It was supposed to be a fastball away,” he said. “Even if I’d been up here all year, I’d have been upset.”

Jason Giambi tied it in the Indians’ eighth with a long pinch-hit homer. The solo shot was estimated at 467 feet and caromed off the batter’s background in center field. His ninth career pinch-hit homer ended his 0-for-24 slump and was his third homer of the season and first since April 20.

Jonathan Broxton (2-1) got two outs in the eighth. Aroldis Chapman pitched the ninth for his 13th save, clinching the Indians’ fourth consecutive loss and sixth in their last seven games.

Reds starter Mike Leake allowed one earned run and five hits in seven and one-third innings, striking out seven to match his season high. He left with a no-decision after giving up Giambi’s homer.

“Even that pitch wasn’t a bad pitch,” Leake said. “He did a very good job with it. I thought I did a pretty good job today, as a whole. That’s a very good lineup. I was going after them, trying to make them hit my pitch.”

“It’s a shame Jason hit that ball,” Votto said. “If it doesn’t, maybe [Leake] finishes the game, but Jason’s been around.”