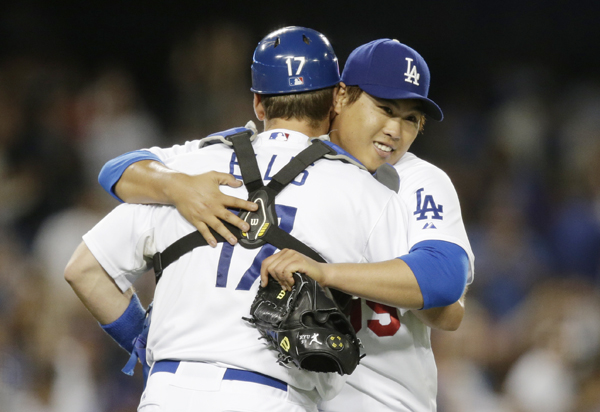 Los Angeles Dodgers starting pitcher Ryu Hyun-jin, right, hugs catcher A.J. Ellis after throwing a shutout against the Los Angeles Angels in Los Angeles, Tuesday. It was Ryu’s sixth victory of the season and the first shutout by a Korean since Park Chan-ho on June 3, 2006. [AP/NEWSIS]

LOS ANGELES - Ryu Hyun-jin dazzled in earning his first complete game in the major leagues, pitching a two-hitter in which the left-hander changed speeds and worked both sides of the plate with ease.

Helped by Luis Cruz’s first homer of the season, the Dodgers beat the Angels, 3-0, in the second game of the Freeway Series on Tuesday night.

Ryu (6-2) struck out seven and walked none. The Korean retired 19 consecutive batters during one stretch. His six victories lead all rookie pitchers in the majors, while his seventy-one and two-thirds innings pitched lead all rookies this season.

“I didn’t think my first complete game would come this early in the season,” he said through a translator. “I was just really comfortable. After the seventh, when I realized my pitch count wasn’t that high I realized I could challenge myself [to finish the game].”

“It’s more of an artist for me, being able to throw both sides of the plate and changing speeds. It’s the art of pitching,” he said, describing Ryu as deceptive.

“He’s a guy whose change-up and off-speed is so good. Now all of a sudden he’s throwing more fastballs,” Mattingly said, noting Ryu’s pitches clocked 93 mph late in the game.

Ryu said, “When the fastball works, everything becomes more effective.”

The rookie is unusual in that he doesn’t throw between starts, something the Dodgers agreed to after signing him to a $36 million, six-year deal that made Ryu the first player ever to go directly from the Korean league to the major leagues.

“Mostly it’s to preserve the arm but the habit started in Korea when you’re used to throwing 125 pitches per game,” Ryu said.

Joe Blanton (1-8) gave up three runs and seven hits in seven innings while facing his former teammates for the first time since the right-hander signed with the Angels in the offseason after pitching the final two months of last season for the Dodgers. He struck out five and walked none.

“Hats off to Ryu. He threw a great game,” Blanton said.

The Angels played without slugger Josh Hamilton, who was scratched just before the game because of back spasms.

The Angels’ only hits were a single by Howie Kendrick in the second and a double by Chris Iannetta in the eighth.

“He worked in some good change-ups and some breaking balls here and there,” Angels manager Mike Scioscia said about Ryu. “We just didn’t get too many good looks at him.”

Ryu didn’t just dominate on the mound. He showed off some skills in the field and at the plate. The rookie outsprinted Alberto Callaspo in a foot race to first base to record the second out of the second inning. Ryu slugged a one-hop double to deep right field in the third for the Dodgers’ first hit.

That drew applause from a smiling Clayton Kershaw, who raised his arms in celebration from the dugout.

Mattingly credited Ryu with making the necessary adjustments to the majors.

“The one good thing we did was not try to force our way onto him, letting him show us his way,” he said.

Ryu is the third Korean to throw a shutout after Park Chan-ho and Kim Sun-woo. Park, the former Dodger who holds the record for most wins by an Asian in the major leagues, threw his first shutout on Sept. 30, 2000, against the San Diego Padres. Park threw two more shutouts before he left the major leagues in 2010. Kim, currently playing with the Doosan Bears, scattered three hits over nine innings against the San Francisco Giants at Coors Field on Sept. 25, 2005, when he pitched for the Colorado Rockies.

Ryu’s effort came in his rookie season. It took Park six years to throw his first shutout and four years for Kim to join him.

Ryu’s feat, in just his 11th game, ties him with Hideo Nomo of Japan, who pulled it off in his 11th game en route to winning the National League Rookie of the Year award in 1995. Nomo went 13-6 and threw two more shutouts that season.

There is only one more Japanese, incumbent or retired, who threw a shutout in the major leagues. Hiroki Kuroda did it in his 13th game in 2008, when he was also playing for the Dodgers.