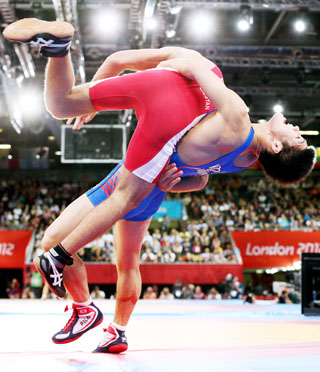 ST. PETERSBURG, Russia - Three months after being dropped from the 2020 Olympics, wrestling won a reprieve Wednesday and made the IOC shortlist for inclusion in the games.

Also making the cut were squash and a combined baseball-softball bid.

Eight sports were vying for a single opening on the lineup. Eliminated from contention were five sports - karate, roller sports, sport climbing, wakeboarding and the Chinese martial art of wushu.

The IOC executive board will submit wrestling, squash and baseball-softball to the full IOC assembly for a final decision on Sept. 8 in Buenos Aires, Argentina.

“The match is not finished,” said Nenad Lalovic, the recently elected president of the international wrestling federation FILA. “We have a second match to fight. But be careful, we are good fighters.”

Wrestling, with a tradition dating to the ancient Olympics, was surprisingly cut from the list of core sports by the IOC board in February. The decision caused an international outcry and prompted the United States, Russia, Iran and other countries to join forces in a bid to bring the sport back.

Wrestling has freestyle and Greco-Roman events, but the sport has gone through a major upheaval since the rejection. Raphael Martinetti resigned as FILA president and was replaced by Lalovic, women and athletes were brought into decision-making roles, and changes were enacted to make the sport more compelling.

Among the changes, matches will consist of two three-minute sessions instead of three two-minute periods, and scoring will be cumulative instead of the previous best-of-three system.

“For sure, the rule changes helped us,” Lalovic said. “We had to do it much earlier.”

The decision on the shortlist came after the eight sports federations made 30-minute closed-door presentations to the IOC executive board.

The board voted by secret ballot over several rounds, with wrestling winning on the first round, with eight of the 14 votes.

Baseball-softball beat karate, 9-5, in a head-to-vote to win its spot on the list. Squash got through in the final round, getting eight votes to defeat wushu with four and sport climbing with two.

“It was never going to be an easy decision, but I feel my colleagues on the board made a good decision in selecting baseball-softball, squash and wrestling to be put forward in Buenos Aires,” IOC President Jacques Rogge said in a statement. “I wish the three shortlisted sports the best of luck in the run-up to the vote in September and would like to thank the other sports for their hard work and dedication.”

Men’s baseball and women’s softball, which have been off the program since the 2008 Beijing Games, merged into a single federation to improve their chances of getting back in. The two were cut by the IOC in 2005, the first sports dropped since polo in 1936.

“We are humbled and honored,” said Riccardo Fraccari, co-president of the World Baseball Softball Confederation. “The decision motivates us to work even harder on behalf of the athletes.”