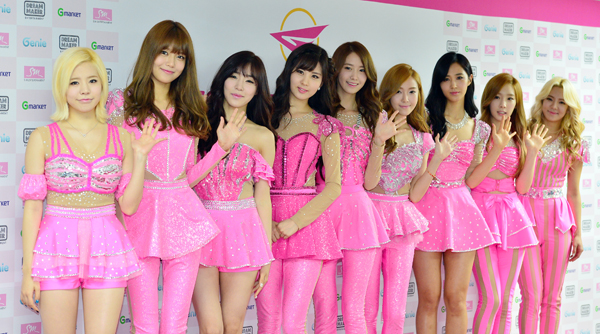 Girls’ Generation launched its first-ever world tour with concerts at home over the weekend.

The nine girls performed 27 songs at Olympic Park in southern Seoul on Saturday and Sunday.

The solo concert, which was only the girls’ third in Korea, was the first leg of a series of worldwide concerts dubbed “Girls’ Generation World Tour ? Girls & Peace.” The itinerary also includes performances in Taipei on July 20-21 and later shows in the United States and Latin America.

“We’ve always talked about the possibility of doing a world tour, so we are honored to finally get this started,” Taeyeon, leader of the group, said during a press conference yesterday.

“We are excited at the thought of meeting fans from all around the world.”

The world tour follows a Japan tour that drew 200,000 fans to 20 concerts in seven Japanese cities between February and April.

“We have performed at a wide variety of venues, and we also have more albums with which we can perform,” Sooyoung said.

“There are so many things that we want to show during the world tour. Fans will be able to share the splendid experiences with us.”

“Our goal is to visit countries that we have never visited and meet fans in those places as much as possible,” Tiffany said.