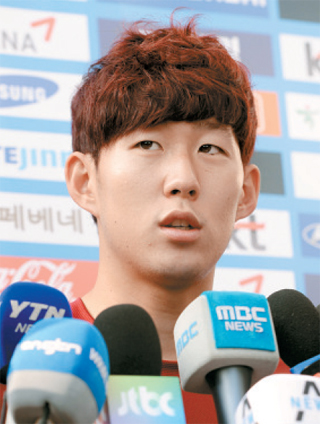 Son Heung-min enters the match against Iran tomorrow with much to prove.

Bragging rights as Asia’s strongest team are at stake in the bitter rivalry that will decide the winner of Group A of the World Cup final qualifying round. And many eyes will be on the 20-year-old striker, including those of his new club.

On Friday, Son confirmed signing a five-year contract with Leverkusen, a move that many predict will be a bridge to the English Premier League. Reports said Leverkusen paid 10 million euros ($13.3 million) - a record transfer fee for the German club, for the Korean.

“My new club has been decided now, so I will put my focus on the remaining match,” Son told a media conference Friday at the National Football Center in Paju, Gyeonggi.

Korea and Iran, the two leaders in Group A, will wrap up their qualifying campaign at Ulsan Munsu Football Stadium.

Uzbekistan, trailing Korea by three points and Iran by two, faces Qatar tomorrow and could overtake one of the leaders with a lopsided victory.

That has driven Korea coach Choi Kang-hee to declare the Iran match a must-win for Korea, although a draw could be enough for Korea’s eight successive World Cup entry.

“I think Korea is best,” Son said, when asked about facing Iran. “They are not a weak team, but we can surely beat them.”

Iran has been a tough opponent for Korea. During previous matchups, Korea has nine victories against 10 losses and seven draws.

Korea’s only loss in the final qualifying round for Brazil was against Iran, allowing Javad Nekounam to score the winning goal in the 73rd minute at Teheran on Oct. 16.

Son revealed that Nekounam kicked him in the back of the leg during the match, and he vowed to take revenge by scoring in the rematch.

“If we are armed well psychologically, I think we could win by three or four goals,” he said.

Choi used him on the left wing in two recent practices, raising the possibility that he will start Son for a second time. He also started the Uzbekistan match on June 11.

That would give him a good chance to impress Leverkusen and help ensure playing time with the southern German club, which would be indispensable for the advancement of his career.

Leverkusen acquired Son to fill the vacuum left by Andre Schurrle, who moved to Chelsea.

Son, who previously said he would play in the Bundesliga for a few more years before trying other European leagues, also might be able to move to Chelsea if he can replicate his success with Hamburg.

Son said in an interview with the German newspaper Bild that he found Leverkusen attractive because the team has produced many good players.

With Leverkusen, Son will make a European league debut next year. He is expected to join Leverkusen beginning with a preseason camp that starts in the middle of July.