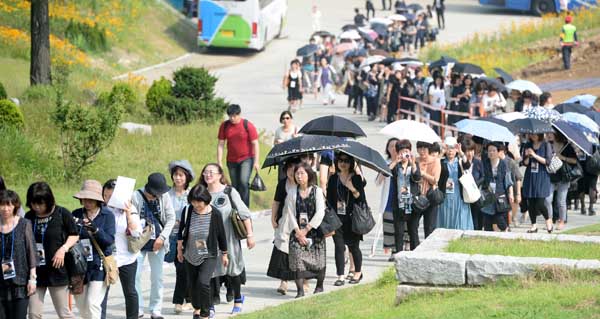 Sunday marked the three-year anniversary of actor Park Yong-ha’s suicide at age 32, which left Korea and his worldwide fans shocked and grieving. A commemoration of his life was broadcast on cable channel tvN’s “eNEWS” yesterday.

At his memorial event held Sunday at Bundang Memorial Park in Gyeonggi, a slew of celebrities paid tribute to the late actor.

Actress Choi Ji-woo, the co-star of Park’s signature drama, “Winter Sonata,” came and mourned his death. Choi watched a tribute video of Park and consoled his mother, who was seated next to her.

Other entertainment figures, including actor Park Kwang-hyun and broadcaster Kim Jun-hee also attended. A teary Kim said, “I feel guilty that I am living so well when he is not here. I hope he is also living happily in heaven.”

Park Yong-ha rose to stardom in the 2002 drama, “Bogo to Bogo” and became a leading Hallyu star through the hit drama, “Winter Sonata,” along with actor Bae Yong-joon and Choi.