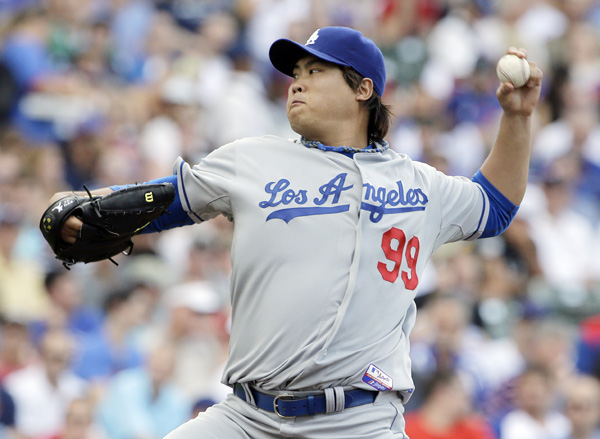 Los Angeles Dodgers starter Ryu Hyun-jin throws against the Chicago Cubs during the first inning on Friday in Chicago. [AP/NEWSIS]

Ryu Hyun-jin of the Los Angeles Dodgers expressed satisfaction after he recorded his 10th victory of the season at Wrigley Field on Friday. With the win, he became the first Korean ever to win double-digit victories in his debut season in MLB.

Park Chan-ho, the Asian pitcher with the most wins ever with 124 victories, had a breakout season in 1997, going 14-8, but that came four years after his major league debut. Kim Byung-hyun, who debuted in the major leagues in 1999, won 10 victories in 2007.

Ryu, who joined the Dodgers on a six-year, $36 million deal in December, said before the season began that he was aiming for double-digit victories this year. Now that he’s achieved his goal, he said he’ll have to come up with a new one.

“It is really good to be able to realize my goal of winning at least 10 games,” Ryu told reporters after the Friday’s game. “I will set a new goal of an 11th win and will do my best to pitch six to seven innings every game.”

For his 21st start of the season, the 26-year-old southpaw gave up a season-high 11 hits against the Chicago White Sox on Friday, but the Dodgers exploded again at bat, giving him a two-run game over 5 1/3 innings. He struck out six. The Dodgers won 6-2.

A day later, the smoking Dodgers broke a franchise record that stood for 89 years.

Chris Capuano scattered six hits over 6 1-3 innings and the Dodgers set a team record with their 13th straight road win, 3-0 over the Cubs on Saturday.

The Dodgers, who haven’t lost on the road since July 6 in San Francisco, eclipsed the 1924 mark set by the Brooklyn Robins.

“You go out there and you’re just waiting to see who’s going to drive in the runs and get the big hits,” Capuano said. “It’s a good feeling when you come to the park.”

Los Angeles is in the middle of a stretch of 26 games in 27 days, and manager Don Mattingly gave his infield an alternative look by taking four-time All-Star first baseman Adrian Gonzales, hot-hitting second baseman Mark Ellis and third baseman Juan Uribe out of the starting lineup.

No matter. There were others who came through at the plate.

Carl Crawford broke open a 1-0 game by driving in two runs with a single in the sixth inning. Jerry Hairston Jr. singled in the first run in the third for NL West-leading Los Angeles, which is 13-2 since the All-Star break and has won 30 of its last 37 overall.

“It’s a good feeling to be a part of history, to keep winning,” Crawford said. “The team is jelling really well right now.”

Capuano (4-6) came up with his second straight strong start and third in his last four. He struck out five and walked only one before four Dodgers relievers closed it out.

“Cappy really did a good job finishing pitches, the whole thing,” Mattingly said. “Some nice plays in the infield, but Cap was really efficient doing his thing.”

The Dodgers turned three of their four double plays behind Capuano, who has been rocked at times this year. But on Saturday he was crisp and in command. “For me, he’s attacked with his fastball more and continued to use that and not always get to his off speed,” Mattingly said. “I just think he’s used his whole repertoire for the right guys.”

Brandon League relieved Capuano with one out in the seventh and runners on first and second but got out of the inning by getting Cody Ransom to ground into a double play. Kenley Jansen pitched a perfect ninth to earn his 16th save in 19 chances.

Jeff Samardzija (6-10) allowed three runs over six innings in Chicago’s third-straight loss. He gave up seven hits, five walks and hit a batter, but was able to get out of jams with nine strikeouts.

“Fastball command is going to be the dictation of pretty much everybody’s outing and he really didn’t have it today,” Cubs manager Dale Sveum said. “He battled and got the outs and kept the game close, but obviously the pitch count after six innings was way too many.”

Dodgers rookie Yasiel Puig had a pair of singles and scored a run, but left the game after a diving catch on Starlin Castro’s line drive in the seventh.

“We’ll see how I feel tomorrow before the game,” Puig said through a translator. “I’ll take some swings and we’ll decide then.”