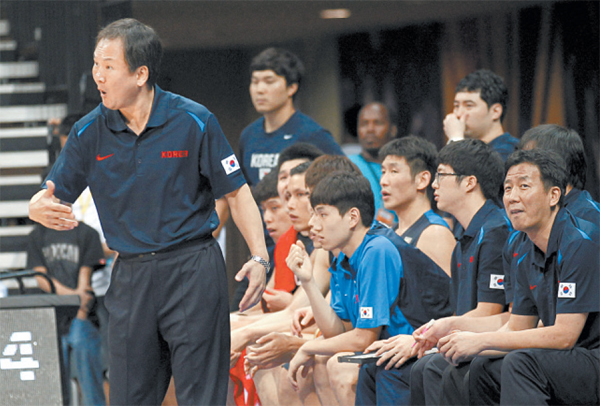 Coach Yoo Jae-hak directs his players against Taiwan at the third-place decider of the Asia Championship in the Philippines on Sunday. Korea won, 75-57, bringing home Korea’s first berth to the FIBA World Cup in 16 years. [NEWS1]

A match-fixing scandal early this year that led to the conviction of star basketball coach Kang Dong-hee served as a wake-up call for Korean basketball, coach Yoo Jae-hak said after his national team won a long-delayed berth to the world championships.

Yoo’s squad returned yesterday after beating Taiwan, 75-57, in the third-place decider at the FIBA Asia Championship in the Philippines on Sunday, winning one of the three berths to the World Cup to be held in Spain next year. It is the first time in 16 years that Korea won a slot in the contest. Asian champion Iran and the Philippines, who lost to Iran, 85-71, in Sunday’s final, grabbed the other two berths.

“I think that the players must have entered this event with a resolution to give their best after the happening of an unfortunate incident in March,” Yoo said, referring to the case involving Kang, with whom he played at Kia Motors.

Kang, 46, a star player-turned-coach who had been at the helm of the Wonju Dongbu Promy since 2009, was indicted in March for fixing four matches in 2011 in return for 47 million won ($42,171) from brokers. On Thursday, he was convicted and received a 10-month prison term. It was the first time a coach was convicted for fixing matches in Korea’s four major local professional sports: baseball, football, basketball and volleyball.

Korean Basketball League Commissioner Han Sun-kyo announced a set of measures in March to address what he called the biggest crisis ever facing the league.

“We played at a time when Korean basketball was suffering a decline in popularity,” Yoo said.

“But we beat China and also won a ticket to Spain, so I think we have been witnessing a rise in popularity of basketball in Korea. As a manager, I am proud of what we did.”

Korea beat 15-time champion China, 63-59, in the group stage, setting the stage for its seventh world championship appearance. Taiwan also had a great run, sinking China, 96-78, in the quarterfinals and beating the Philippines, 84-79, in the group stage.

“A game like this puts us under huge mental pressure. It certainly did both for us and Taiwan,” Yoo said. “I think our players were equipped better mentally. They had a bigger aspiration to go to Spain. I am thankful for that.”

He complimented 1.90-meter-tall guard Kim Min-goo in particular. The Kyung Hee University senior led Korea against Taiwan, scoring a game-high 21 points. He also recorded a game-high 27 points in the semifinals against the Philippines, although Korea lost, 86-79.

“Korea had many good shooters, but there were few of them in recent years. I wish that a young Kim Min-goo would revive the tradition and that many other players of similar styles would follow him up,” he said.

It was Yoo’s first time at the helm of the national team, after he led Korea to a silver medal at the Guangzhou Asian Games in 2010. He said the Asian championship was tough, but he enjoyed time with the “best players in Korea.”

Yoo is expected to stay at the helm of the national team until Korea competes at the World Cup and the Incheon Asian Games. If he holds on to his job, it will be the first time Yoo will make a world championship appearance. As an athlete, he never made it to the World Cup, although Korea competed at four consecutive World Cups between 1986 and 1998. Though he was a promising guard, he was not selected to the national team during that period due in part to injuries.

Yoo is a successful professional coach. He won three KBL champion titles through last season, all with the Ulsan Mobis Phoebus, where he took the helm in 2004. He also won in 2007 and 2010. At age 50, he is the coach with the most victories, with a record of 425-358.