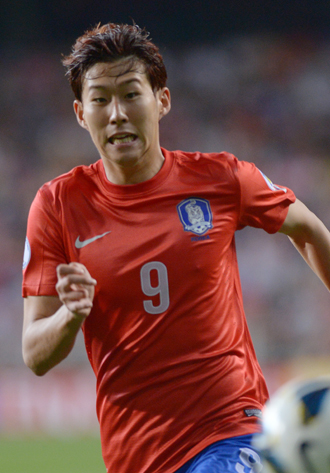 Bundesliga “Sonsation” Son Heung-min is getting attention as the most likely player to end Korea’s goal drought when it plays two buildup matches early next month.

On Tuesday, coach Hong Myung-bo announced his 25-man roster for a Sept. 6 friendly against Haiti and a Sept. 10 friendly against Croatia. For the first time under Hong’s leadership, the roster includes Europe-based players, including Son, who is off to a strong start to a second successive prolific season.

Korean goal-getters such as Ji Dong-won, Koo Ja-cheol and Lee Chung-yong were also among the seven from Europe on the roster, but none of them have opened the season by scoring yet. Ji has been given a second-half substitute role with Sunderland this season, while Koo’s scoring chance at VfL Wolfsburg has been limited by the shift of position into the rear central midfield. Lee has steadily made the starters’ lineup for Bolton Wanderers but is yet to score.

Son, on the other hand, has quickly settled into his new club, scoring his first goal of the season in his first league match for Bayer Leverkusen against SC Freiburg on Aug. 10. He scored 12 goals for Hamburg last season, becoming the club’s top scorer. With Leverkusen, he has emerged as one of the three pillars, along with Stefan Kiessling and Sydney Sam.

Son has been called up for the national team since December 2010 but is yet to show a performance commensurate with his price tag in Europe, having scored two goals in 16 showings in a Taegeuk uniform.

Hong’s professed strategy reveals that Son could have a chance to be the coach’s beloved pupil. Speaking to reporters after announcing his third national team roster on Tuesday, Hong said he prefers that midfielders or wingers fill the vacuum left by a sole striker. Korea has scored only one goal in four matches under Hong, by Yun Il-lok, a midfielder. Son has been successful in creating goal chances from the forward midfield positions.