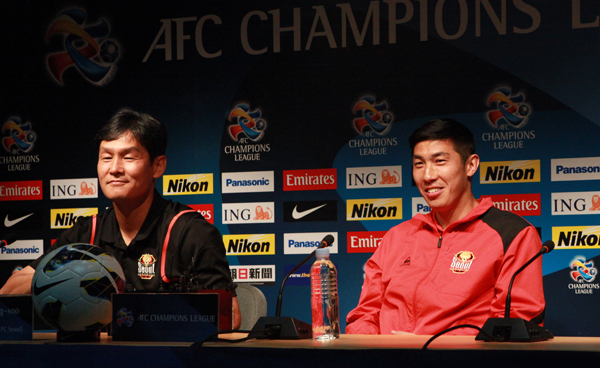 FC Seoul’s manager, Choi Yong-soo, says that he considers tonight’s match against Iran’s Esteghal FC to be much like a battle between national teams, hoping to use national pride to rev up his players.

“It’s country-versus-country rather than club-versus-club for me,” Choi said in the press conference. “I will consider the FC Seoul emblem on our uniforms to be the national flag.”

The Korean national team has lost twice to Iran in the past year, most recently a 0-1 loss in June in the 2014 Brazil World Cup qualifying round.

FC Seoul will take on Esteghlal today at 7:30 p.m. at the Seoul World Cup Stadium, western Seoul, in the first leg of the Asian Champions League, or ACL, semifinals.

The second semifinal game between the two teams will be held in Tehran on Oct. 2.

“This is our first appearance in the ACL semifinals,” said Choi in the media day press conference held yesterday. “I know they [Esteghlal] are a strong team, but we will do everything we can to defeat the opponent in the home game to take an advance to the final stage.”

Choi’s strategy is quite simple. “We have to score as many goals - as many as we can - and not allow goals because the second game will be held in their home,” Choi said. “I think this game will be very different from the match we had with Saudi Arabia’s Al-Ahli. This Iran team plays a rough, European style, while the Saudi club is more like South American teams.”

Seoul’s right back, Cha Du-ri, said he’s approaching the match just like his manager is. “Matches against Iran were always difficult, and I saw many of Iran’s national team members on Esteghlal’s roster,” Cha said. “But if we can play the way we need to, I think we can fly to Iran with a victory.”

Seven players on Esteghlal play for the Iran national team.

Esteghlal’s coach, Ardashir Ghalenoei, said his mission in the Seoul game is to score an away goal. “I know that FC Seoul is a strong ball club,” he said. “I think tomorrow’s game will be very difficult for us. We will be surrounded by some of the most passionate football fans in the world. I can’t tell the details about our strategy, but since this is a home and away event we will try our best to score as many goals as we can.

“Koreans have been impressive in international events like the World Cup, and I think their spirit and performance are competitive.”

Esteghlal arrived to Korea on Friday in the middle of the Chuseok holidays. They reportedly were surprised to find so few restaurants open during the busy holiday season.

In general, most of the teams arrive two days before a game is scheduled.

“They complained about many things and asked us to help them find a field for training,” said an FC Seoul official who wished to remain anonymous. “We complied with most of their requests even during the holidays, but they never stopped complaining.

“According to the ACL’s regulation’s, we only need to cooperate with them from two days before the game is held.”