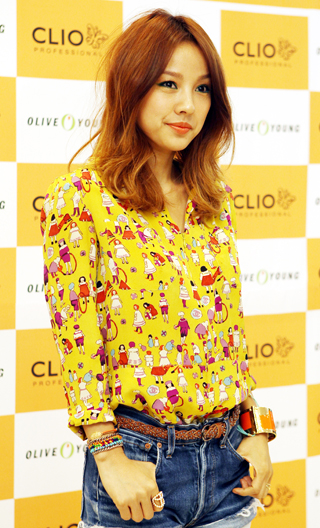 Singer Lee Hyo-ri returned to Korea on Monday with her new husband, composer Lee Sang-soon, after traveling Europe on a two-month honeymoon.

The couple, who left for Germany in September, returned to Korea from Amsterdam. They tried to avoid drawing too much media attention at the airport, with Lee Sang-soon preceding his wife by several minutes.

The two then met with an official at the airport who was waiting for their arrival and headed home soon afterward.

Despite being a celebrity couple, the two kept things comfortable, passing through the airport wearing bulky jackets and hats.

The couple, who started dating in 2011, got married on Sept. 1 on Jeju Island. After they had celebrated tying the knot in a small ceremony, only for close friends and family, they left for Europe.