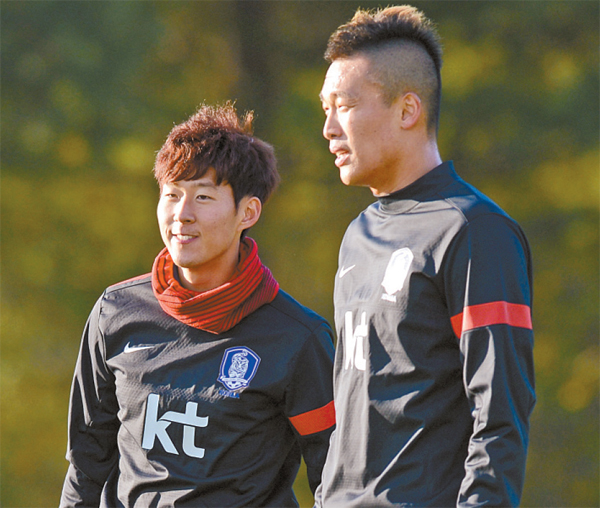 Son Heung-min of Leverkusen and 196-centimeter-tall striker Kim Shin-wook of Ulsan Hyundai, who are best friends and have been impressive in their recent league games, will likely lead the Korean national football team’s offense in its friendly match against Switzerland tomorrow.

It is the first time they will play together under coach Hong Myung-bo’s leadership. They both played for former coach Choi Kang-hee’s squad in the 2014 Brazil World Cup preliminary rounds, but Hong didn’t call up Son until September, and Kim only played for Hong’s first few matches.

Hong has been hesitating to include the tall striker in his lineup, saying that Kim, whose best offensive weapon was headers, needs to show more attacking patterns. He also said Son needs to work more on team plays. Hong mainly uses Spanish-style passing football under a 4-2-3-1 formation.

In the last five months, however, Kim has been the best scorer in the K-League Classic, with 19 goals. In the 36th-round match against Jeonbuk Hyundai Motors on Saturday, he led Ulsan’s 2-0 victory by scoring the team’s first goal in the 79th minute. Yesterday, Kim was selected as the MVP of the 36th round.

Son struggled in Leverkusen in October but has bounced back recently. He became the first Korean to score a hat-trick in any European league, with three goals in a league match against his former club, Hamburg SV, on Saturday.

Hong expects these two best friends, who are called Tom (Kim) and Jerry (Son), to improve his offense. The national team has scored only nine goals in eight matches since Hong became coach. Kim is predicted to be one of the top strikers, and Son is expected to play as a left wing. Hong had a hard time finding a striker to place on the top of the offense line. He had used many players, including Ji Dong-won of Sunderland, but the line was not competitive enough.

“I expect the two to play well together in the upcoming match,” Hong said yesterday after the training. “Because this is the last A-match being held in the country this year, I want to give a nice present to fans.”

The two monitor each other’s games through the Internet and cable television and give each other advice. Son recently gave Kim the book “Best Player,” written by former British table tennis star Matthew Syed, as a present.

“I was very happy for Son’s hat-trick,” Kim said. “And I think we could bring some positive impact in the upcoming games. Since I have been waiting for Hong’s call to join the national team, I will try my best to show I what I’ve got on the field.”

Forward Lee Keun-ho of the military team Sangmu Phoenix, who was Kim’s teammate last season, said midfielders need to run more than they usually do in order to use Kim’s height. “Midfielders need to know how they should utilize Kim’s tall height,” he said. “Just making crosses that are aimed at his head is useless. They should penetrate to areas close to Kim after they cross the ball to keep ball possession in the opponent’s areas.”

Along with these two, Lee Chung-yong of the Bolton Wanderers is predicted to start as a right winger, while Kim Bo-kyung will play in the center between Son and Lee. Sunderland’s Ki Sung-yueng and Ko Myong-jin of FC Seoul will be the two defensive midfielders in Hong’s double volante strategy - putting two defensive midfielders in front of four defenders. Jung Sung-ryong of the Suwon Bluewings likely will be the goalkeeper.

The match will be Korea’s first against Switzerland since the 2006 Germany World Cup. Korea lost that match, 2-0, and was eliminated in the first round. “I hope our players make a nice revenge for the 2006 team,” Hong said.

“Korea is a speedy team,” said Switzerland coach Ottmar Hitzfeld. “I saw how Korea played against Brazil. They pressed the Brazilians very well in the midfield area and were fast in counterattack situations. As we might face an Asian team in next year’s World Cup, we will do our best in preparation for the Brazil event. I think the game will be very competitive, considering the level of both teams.”