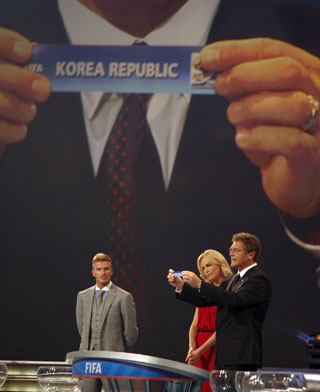 
The teams Korea will face in the group stage of the 2014 Brazil World Cup have been decided, starting with a match against Russia on June 17.

The Taegeuk Warriors will also face Algeria and Belgium in the first round.

Analysts said it was a good draw for the Korean team as it will avoid the European and South American powerhouses the team has struggled with in the past.

Judging by FIFA’s world football rankings, the Taegeuk Warriors looked like they could have be in serious trouble, but analysts said the draw was one of the best results Korea could have wished for.

The toughest challenge in the first round will be the match against Belgium, which joined the group as one of the top-seeded countries. The Belgian team features several big-name players familiar to Korean soccer fans: captain Vincent Kompany, a key defender for Manchester City; midfielders Eden Hazard of Chelsea FC and Marouane Fellaini of Manchester United; defender Jan Vertonghen of Tottenham Hotspur; and forwards Christian Benteke of Aston Villa and Romelu Lukaku of Everton FC.

The match against Belgium is Korea’s last group stage match, meaning that if Belgium wins its first two matches against Russia and Algeria, there is a chance the team might rest some of their best players.

One weakness of Belgium is its lack of World Cup experience. It will be making its first appearance since the 2002 Korea-Japan World Cup, and the only players who have played in a World Cup are defender Daniel Van Buyten of Bayern Munchen and midfielder Timmy Simons.

The team is currently managed by 44-year-old soccer hero Marc Wilmots. However, after being sacked and taking the helm of the Belgian national team, he has only seven months of coaching experience at the club level. Wilmots also recently faced strong criticism from fans over a 3-2 loss to Japan in a friendly match in November. Considering other top-seeded teams like Brazil, Spain, Germany and Argentina, Belgium was on Korea’s wish list along with Switzerland. Korea drew 1-1 against Belgium in the 1998 France World Cup.

Representing Africa in Group H is Algeria, a team Korea should have a good chance to beat. The Taegeuk Warriors avoided perennial African powers Nigeria, Ghana and Cameroon that are seen as stronger than Algeria.

Algeria has appeared in three World Cups, but never advanced to the second round. Korea has a defeat and a draw against Algeria in two friendly matches.

Analysts say the most important match will be the group opener against Russia. While Korea would rather have drawn Bosnia-Herzegovina, which is making its first World Cup appearance, or Greece, analysts say Russia is a team that Korea can defeat despite a 2-1 loss in a November friendly.

Russia is led by Fabio Capello, an Italian coach who was on the sidelines for England until 2012.

Analysts said Russia has been weakened since Euro 2008, and the team is in the process of rebuilding with younger players.

“None of them is an easy opponent because every team that has advanced to the World Cup has qualified through tough preliminary rounds,” Hong Myung-bo, Korea’s coach, said after the draw. “We will need to be well prepared, and it is obvious that the first match against Russia will determine whether or not we advance to the second round.”

Another factor in Korea’s favor is that the team will not have to travel much. Korea will stay in Foz do Iguacu and all of the three group stages will be held nearby.

Organizing members of FIFA congratulated Korea on having one of best schedules after it was categorized as a Group H nation.

Korea also doesn’t have to face a team from South America. It has never won a World Cup match against a South American squad, losing 4-1 to Argentina and 2-1 to Uruguay in the 2010 World Cup.