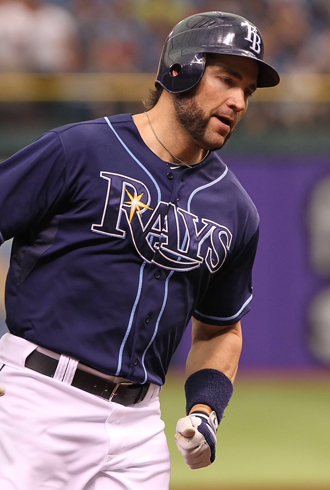 Another foreigner with Major League Baseball experience is coming to Korea. The SK Wyverns said they yesterday signed a one-year, $300,000 deal with outfielder Luke Scott, who played with the Tampa Bay Rays this past season.

Scott’s batting average seems low, but his average OPS in the big leagues is .821, meaning he can produce extra-base hits and gets on base often. Because of this, Scott played 10 games as a cleanup hitter and also batted fifth in the lineup in 226 MLB games.

The player wasn’t one of the four that were on the Wyverns’ shopping list in the hot stove season, but while negotiations with the others didn’t go well, the Wyverns obtained intelligence that Scott had a positive attitude about playing in the KBO.

“That was kind of lucky for us to seal a deal with him,” a Wyverns spokesman said. “We initially targeted a right-handed bat, but the team thinks that Scott certainly is a better player.”

Some Korean fans are happy to see big-name foreigner in the KBO, but contracts with several new faces, including Scott, Jorge Cantu and Felix Pie, are contentious because it’s hard to believe that players with recent MLB experience would agree to a $300,000 deal to play in a country that is about 6,500 miles away from the United States. Scott received $2.75 million from the Rays last season.

Under KBO rules, the maximum amount a team can pay a foreign player is $300,000, but no one except the KBO believes that foreign players have signed deals for that amount. Because Cantu, who signed a one-year deal with the Doosan Bears, was also a target of a Japanese club, it implies that the Bears offered more money than the Japanese team. Most KBO teams also provide conveniences like housing and airline tickets.

The KBO office isn’t the only entity that hasn’t been forthcoming. The LG Twins said last week that they have re-signed their ace pitcher, Radhames Liz, and the Bears also re-signed Dustin Nippert. But neither club provided contract details to the media.

“The KBO has been consistently saying that they will improve their administrative work to develop the league into a better one,” analyst Kim Jung-keun said. “But without solving the issue on providing accurate information on foreign players, their efforts end in empty talk.”

Meanwhile, sources said the Lotte Giants, who were big shoppers in the offseason, are monitoring free agent Yoon Suk-min, who is trying to play for an MLB team next season. Yoon went to the United States in November to find a team with his agent, Scott Boras, but he hasn’t been successful. There were rumors that the Minnesota Twins were targeting Yoon, but they have since signed other free agents.

“As far as I know, the Giants will attempt to make a deal with Yoon in case he fails to move to the MLB,” a source told the Korea JoongAng Daily on condition of anonymity.