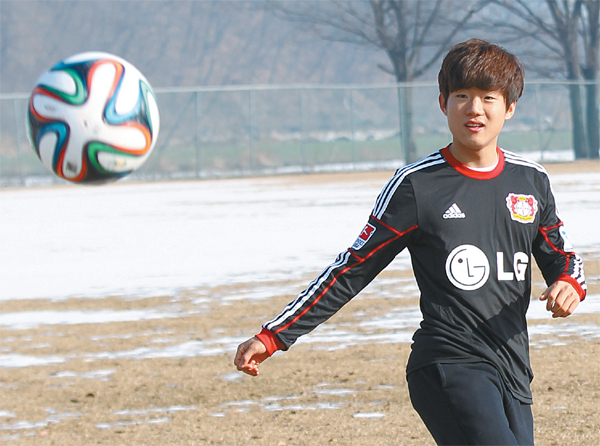 Because Wednesday was Christmas Day, the Anseong campus of Chung-Ang University in Gyeonggi was quieter than ever. But the day wasn’t just a holiday for Ryu Seung-woo, 19, who was recently loaned from the K-League Classic’s Jeju United to Bayer Leverkusen of Germany’s Bundesliga. Ryu began with a long-distance run, then worked alone on dribbling and shooting in the chilly weather before having an exclusive interview with Ilgan Sports, an affiliate of the Korea JoongAng Daily, after the training session.

Ryu is one of Korean football’s best young prospects, along with “sonsation” Son Heung-min, who is now Ryu’s teammate. Ryu led the Korean U-20 national team to the quarterfinals in FIFA’s U-20 World Cup in July with two goals.

He surprised fans and analysts by joining Jeju United after rejecting offers from big European clubs such as Borussia Dortmund and Real Madrid. Weeks after he joined the club, he again surprised fans by moving to Leverkusen for one year.

On Friday, he passed a medical test held in Leverkusen and came back to Korea on Monday as the German league went into a two-week break.

“It’s not time to relax for me, and I don’t have a girlfriend,” Ryu said when asked about his vacation plan. “I want to be in perfect shape before I leave to Portugal to join the team’s training on Jan. 2.”

Q. How were your days in Germany?

A. I felt like I was in a dream when I was there for a medical test. Before I left to Germany, I memorized how to say, “Hello, my name is Ryu Seung-woo and nice to meet you,” in German and used this when I first met the team’s coach, Sami Hyypia. I made some mistakes when I did it again to General Manager Rudi Voeller, but he encouraged me and said don’t be shy and don’t be afraid of making mistakes on the field, just be like I was when I met him. I also spent two days in the house of Koo Ja-cheol [Vfl Wolfsburg] and he told me to be friendly to teammates in the locker room and to make good friends and learn the language. I started studying German and one of my learning materials is a cartoon aired on German television.

Why did you choose Leverkusen?

Dortmund and Real Madrid are big clubs that every football players dream of in their career, but I decided to stay in the K-League to have more playing time. But I found myself feeling regret about not playing in a European league. At that time, Leverkusen offered me a one-year loan offer.

Can we say Son Heung-min was one of the reasons you decided to go to Leverkusen?

Indeed. It was a huge part of the decision. I really like that I can play with a person from the same country in a big European league. As everyone knows, his abilities in football are fantastic. He looks like he is ready to play in any big league, and he has such a positive confidence. I want to learn many things from him, and I want to be a player like Son. He encouraged me when we met each other when I had a medical test last week.

Leverkusen is a big club. What is your plan to adapt to the team?

I watched the game against SV Werder Bremen on Sunday, and I was able to see Leverkusen is a team with strong defense and counterattacks. I play more like the Spanish-type football (“tiki-taka”), but I will try my best to adapt to the team’s strategies. I think I can also improve my defensive ability, which was considered one of my weaknesses.

Are your parents happy about this move?

They live in Gimhae, South Gyeongsang, and I’m their only child. But my family always suffered financial difficulties. My father is a taxi driver, and my mother worked as a staff member at a local restaurant but she had to quit for health issues. However, they were never stingy with money for me. They always tried to feed me with good beef and sometimes tried to provide foods for stamina, like eel and carp. Our family moved to Ansan when I was a middle school student. I was young, but I was able to see my parents having a hard time funding many things related to football. I tried to go to a high school and a university that could give me a full scholarship and I made it. I can’t wait to receive my first salary from the team in January because I want to give it to my parents as a present.

You’re not a big guy physically as a football player. Have you ever felt bad about it?

When I was in middle school and high school, people around me always said I would be able to go to a pro team if I’m a bit taller than I am now. [Ryu is 172 centimeters tall and weighs 67 kilos or 5 feet, 6 inches and 147 pounds.] After I heard someone say that jumping rope helps you grow, I jumped rope 1,000 times a day for six months, but it only made me healthier [laughing]. Since FC Barcelona’s “tiki-taka” football has become trendy lately and Lionel Messi became a superstar, many prejudices about small guys like me have been disappeared. My goal is to become like Andres Iniesta, who is 170 centimeters tall.

What is your goal for next year?

I first want to make a good debut as soon as possible. I will try to impress the team’s coach during January’s team training in Portugal.

Some call me “little Park Ji-sung of the PSV Eindhoven,” who certainly has been one of the best players in the history of Korean football, but I think that nickname is too big for a player like me.

I still have to learn many things and should accomplish many more things to make myself proud of being called “little Park.” Sometimes that gives me a lot of pressure, but I promise that I will get better.