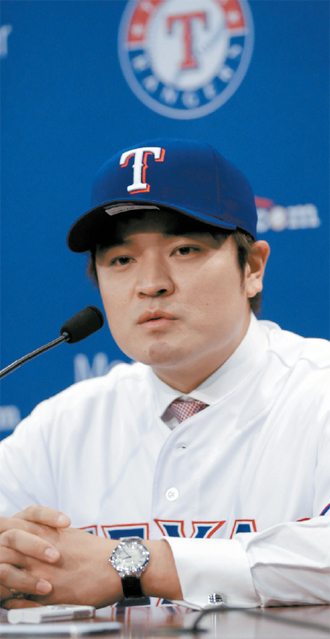 Choo Shin-soo talks about his contract with the Texas Rangers at Rangers Ballpark in Arlington, Texas, Friday. [USA TODAY/NEWS1]

When Choo Shin-soo received a phone call from his agent, Scott Boras, late one night earlier this month and heard that the Texas Rangers had agreed to a seven-year, $130 million deal with him, he woke up his wife, who was asleep with their 2-year-old daughter, So-hee. The couple then pulled out a bottle of wine and celebrated the big signing. The 31-year-old outfielder thanked his wife, Ha Won-mi, 31, for the sacrifices she has made for him and their family for 10 years in a country that is about 6,500 miles away from home. When the Rangers introduced Choo on Friday, he said that he wouldn’t be a big-name player without his wife’s great support.

In December 2002, when Ha was 20, she told her father that she was going on a blind date with a baseball player. Her father, who was reading a newspaper, asked the guy’s name and was soon surprised by her response. “Did you say Choo? You mean the guy who went to Major League Baseball after graduating from Busan High School?” her father said. Choo was not a big-name MLB player at the time, but he was quite famous among baseball fans due to often being introduced as a player who would lead Korean baseball in the future. Ha didn’t even know much about baseball until that time.

The two soon fell in love, but they weren’t able to be together because Choo had to go back to the United States. The only thing they could do was speak on the telephone all night long. Their relationship went on like that for a year, but it seemed like dating via phone didn’t satisfy Choo.

Using her vacation time, Ha went to the United States to stay with Choo for about a month or two, but there she got pregnant with their first son, Mu-bin, who is now 8. Ha was a university student studying acting, but her dream of becoming an actress ended. From that moment, her family’s happiness became her dream.

Although the two have been together for 10 years, Ha couldn’t have the fancy wedding every bride dreams of due to Choo’s busy schedule. So, whenever they endured hard times, Choo promised a bright day would come to the family in the future. That promise became a reality on Dec. 22 when Choo signed the sixth-largest deal as an outfielder in MLB history with the Rangers. In an interview at Rangers Ballpark in Arlington, Choo said, “Without my wife, I wouldn’t be able to sit here and speak to you as a big-league player. I played baseball for my own in the past, but now I play baseball for my wife and children.”

Choo was born into a poor family. He only received $1,000 to $2,000 monthly when he was a minor-league player and that didn’t improve until 2008, when he became a full-time major leaguer with the Cleveland Indians. “When she had Mu-bin, I wasn’t able to feed her the food that she wanted to eat,” Choo said. “It was one of the most painful times in my life.”

Choo and Ha also had to rent a small house for $700 per month with another couple when he was a minor leaguer. “We sometimes couldn’t get to sleep when the other couple, who were also in their early 20s, had a fight,” Ha said.

Over time, the 20-year-old girl became a strong mother and wife. In 2009, the couple’s second son, Keon-woo, was born. Because Choo was at an away game, Ha had to drive herself to hospital to give birth, then drove back home to take care of 5-year-old Mu-bin only a few hours later. 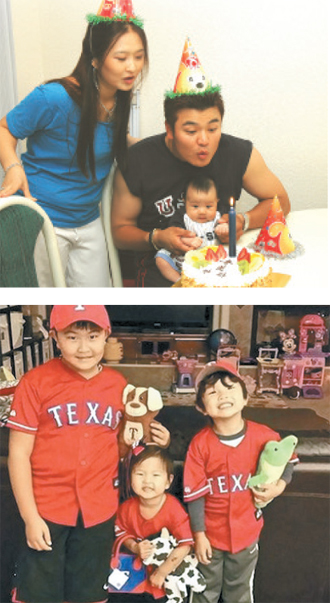 “She never complained,” Choo said. “The best choice I ever made in my entire life is my wife. Without speaking about her, I think I don’t have many things to talk about in my life.”

Choo recalled that 2007 was the hardest time in his baseball career. In September of that year, he had Tommy John surgery not long after joining the Indians. He was traded from the Seattle Mariners to the Indians in July 2006 and started appearing in MLB games the next season. Choo said he felt as if the elbow injury was taking away his hope of becoming a full-time major-league player.

One evening at the dinner table, he asked his wife whether he should go back to Korea because the family was having a hard time financially and it would take him about a year to recover from the surgery.

When Choo’s surgery was reported by the media, several Korea Baseball Organization teams internally developed a plan to acquire Choo. His estimated value at the time was about 1 billion won ($950,000) per year.

“Is this because you worry about our family?” Ha asked. “Then only me and the children will go back to Korea. Don’t worry about the kids, please. I don’t want you to give up your dream.”

The couple cried all night long.

He was also selected as a member of the Korean national team in the 2010 Guangzhou Asian Games, leading the team to win the gold medal with three home runs and 10 RBI. Because the team won the gold medal, he was exempted from his two-year military duty, removing a huge barrier that would have prevented him from making a long-term deal with a major-league club.

“I’m not an Albert Pujols or Barry Bonds type of player who can produce 40 or 50 home runs per season,” Choo said.

“But I hope fans will remember me as the hardest-working player on the field when they think about me after I retire. I will do what I am capable of and I will do my best for the fans and my family.”