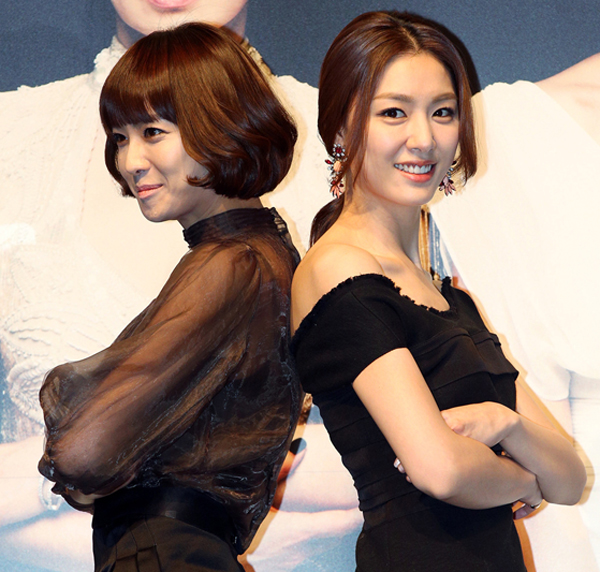 Singer and actress Park Jung-ah, who was once a member of the girl group Jewelry, plays Lee Mi-na, a rich man’s daughter.

Actress Seo Ji-hye plays Lee’s friend Yoon Shin-ae, who grew up in the same house as her but was the daughter of the family’s maid.

“The drama shows how two women go through conflicts even while they were supposed to trust each other,” said Han Cheol-su, director and head producer of the drama, at Hoam Art Hall in central Seoul last week during the press conference to promote the series.

“Also, we plan on showing how the two characters patch things up and recover their friendship.”

Park shared her excitement over featuring in the drama, in which she gets to explore a deep rivalry with her former best friend over a man, wealth and self-esteem.

“The character I’m playing has a fierce rivalry with Yoon, who, even though she doesn’t come from a wealthy family, has everything else, and is brighter and bolder despite her background,” Park said.

“It will be fun to see how the two interact.”

Park also implied that there is going to be some nefarious action, although she avoided spilling any details.

“People may have an easier time sympathizing with my character because her wicked tricks aren’t just about getting love,” she added.

The drama is also promising plenty of eye candy in the form of some amazing fashion.

As Yoon becomes rich toward the middle of the drama, after inheriting a fortune through marriage, she will become more extravagant, showing the change of her situation. While the two actors compete to show off their fashion sense, viewers will gain some good style tips.

“I will make my character eye catching with her fashion style, so please wait for that moment,” said Seo.

Park said she has to keep a close eye on the items she wears on the drama because they are so expensive.

“My stylist is having a hard time getting clothing and accessories that make me a ‘noblewoman,’?” Park said.

“As we use very expensive jewelry every day, we have to pay more attention to guarding our cars.”