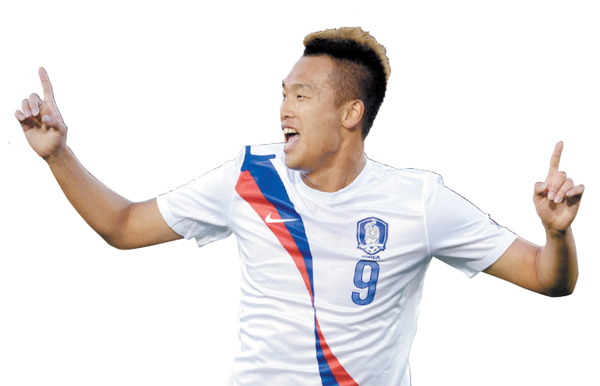 LOS ANGELES - The Korean national football team, led by Coach Hong Myung-bo, made a good start to the year with a 1-0 victory in a friendly match against Costa Rica.

The Taegeuk Warriors won their first match of the year on Saturday, local time, at the Coliseum Stadium in Los Angeles thanks to a goal scored by 196-centimeter-tall (6-foot-5) striker Kim Shin-wook. Kim received the ball in the 10th minute from midfielder Ko Yo-han, then stroked it into the net with his right foot from the inside right of the penalty box.

“I’m happy that we won the year-opening match,” Hong told reporters after the match. “But I’m not satisfied with the 1-0 score because we obviously had more scoring chances. It is good news that our top player [Kim] scored in this match and Ji Dong-won, who joined Bundesliga’s FC Augsburg from English Premier League’s Sunderland last week, scored his first goal of the season in his club team match, but I feel like we still don’t have the perfect answer for the spot.”

Supported by about 2,000 Korean fans, the Taegeuk Warriors dominated the match. Hong started the match with his favorite 4-2-3-1 formation, putting Lee Keun-ho as the center midfielder to lead the team’s offense, with Kim Shin-wook placing Kim Min-woo on the left wing and Ko Yo-han playing on the right wing. Lee Myung-joo and Park Jong-woo supported the attackers as defensive midfielders and Kim Jin-su, Kang Min-soo, Kim Ki-hee and Lee Yong started as the team’s back four, with Kim Seung-Kyu as the goalkeeper.

Kim Shin-wook, who led the K-League Classic in scoring with 19 goals this past season, showed his competitiveness again by scoring a goal in two consecutive A-matches. Kim also scored a goal against Russia in the Nov. 19 friendly match.

Using his height, he pressured the opponents’ defenders and when they concentrated their efforts on him, he made some decent passes to the other attackers as they penetrated into the opponent’s goal area.

Having scored two games in a row, Kim has taken some pressure off Coach Hong, who has been having a hard time finding decent strikers for the Brazil World Cup in June.

After Hong started leading the team in June, the team only scored one goal in July’s East Asia Cup. The team started scoring in a friendly match against Haiti on Sept. 6, but the goals weren’t made by strikers. The goals scored in the last few A-matches were made by midfielders and defenders, including by Son Heung-min of Leverkusen, Lee Keun-ho of Sangmu Phoenix, Kim Bo-kyung of Cardiff City and Hong Jung-ho of FC Augsburg.

“It looked like the Costa Rica players weren’t in perfect shape,” Hong said. “We were able to cut off the opponent’s passes in the midfield areas and make some sharp counterattacks, but we failed to score more goals in many chances. But because this is the beginning of the year, I think we will get better.”

Costa Rica, No. 32 in FIFA’s world football rankings, didn’t start their best players as they had a friendly match with Chile on Wednesday, which they lost 4-0. Just like Korea, they also didn’t call up players from the European leagues.

“It was tough schedule for us as we had a long trip to Los Angeles,” the Costa Rica coach, Jorge Luis Pinto, said.

The national team will return to Korea after a friendly match with Mexico on Thursday and with the United States on Feb. 2.

“Our players are not in perfect shape because the K-League’s season finished in December,” Hong said. “Some players like Shin-wook got tired after playing 70 minutes, and midfielder Park Jong-woo had a cramp in the second half. We will focus on recovering our physical condition first to prepare for the Mexico match.”