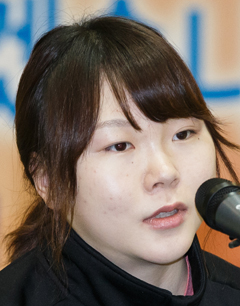 Most athletes dream of competing in an international event like the Olympics during their career. Some of them aim to win a medal for their country, while others regard it as meaningful just to participate. For 25-year-old short track skater Noh Sun-young, the Sochi Winter Olympics, which begins next month in Russia, was going to be a chance for her to share the experience with her younger brother, Noh Jin-kyu, 22, a rising star in Korean short track.

Sadly, that isn’t going to happen. Last week, Korean fans were surprised by the news that Jin-kyu is fighting cancer. According to the Korea Skating Union, Noh underwent surgery to remove a tumor under his left shoulder blade on Wednesday at the Korea Cancer Center Hospital in Nowon District, northern Seoul. The hospital said a tumor was found on Noh’s body in September. Because the hospital that first found the 6-centimeter (2.36-inch) tumor told Noh that it wasn’t malignant, Noh delayed having it removed so he could go to the Olympics.

Noh was supposed to compete in Sochi in the men’s 5,000-meter relay, but he injured his left elbow and shoulder while training on Jan. 14. While being treated for his injured arm at the Korea Cancer Center Hospital, it was discovered that the tumor was malignant and had grown to 13 centimeters, so it was removed.

The hospital officially diagnosed Noh with osteogenic sarcoma, which is a bone tumor that usually develops in teenagers, and said he needs to receive radiation and chemotherapy treatment for at least six months.

“It is usually found in the knees and arms of men in their teens and 20s, but it is a rare disease that is found in only about 15 of every 1 million people,” said Jeon Dae-keun, Noh’s doctor at the Korea Cancer Center Hospital, adding that the surgery was successful.

“I feel very sorry for my brother because I know how hard he has been trying to be a part of the upcoming Olympics,” Noh Sun-young said. “I think all I can do for my brother is to do my best to make him feel better. I believe that he will beat the illness, and I want to see him racing on a rink again just like he wishes. I want to ask people to encourage him and give bigger support for the national team.” 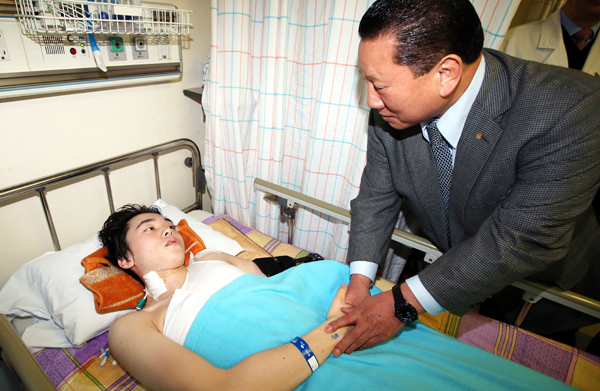 The siblings have been spotlighted as athletes who will lead the country’s short track teams. In the 2011 Asian Winter Games held in Kazakhstan, Jin-kyu won gold medals in the men’s 1,500 meters and the 5,000-meter relay, while Sun-young won the gold medal in the women’s mass start and the silver in the 1,500 meters.

Sun-young has had two Olympic experiences, in 2006 and 2010, but this year would have been the first time for the siblings to compete in an Olympics together. Instead, Sun-young will compete at Sochi alone. She will participate in the 1,500 meters and the 3,000 meters.

“This is a huge loss for the country,” said Kim Jung-haeng, chairman of the Korea Olympic Committee, who visited the hospital where Jin-kyu is recovering yesterday. “I heard from his doctor that the possibility is high for him being completely recovered. I expect him to be racing on a rink like he used to sometime in the future. We will do our best support when he starts working on skating again to help him to be back in shape as the world’s top-level skater. I want to ask the country to encourage him to be fully recovered and to appear in the Pyeongchang Winter Olympics, which will be hosted by our own country in four years.”

The hospital said Jin-kyu will be discharged as early as this weekend. “He decided to receive outpatient treatments,” a hospital spokesman said.