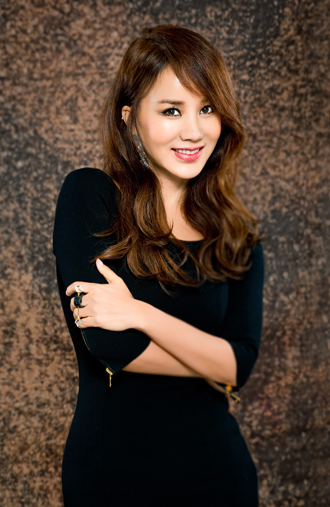 The new movie “Venus Talk,” which opens Feb. 13, talks about a subject rarely covered in modern Korean cinema: the passions of women in their 40s.

Uhm Jung-hwa plays Shin-hye, a single woman in a relationship with a man 17 years her junior. It’s the singer and actress’s second time working with director Kwon Chil-in, after their 2003 movie “Singles,” which focused on love and life for women in their 30s.

“At the time, I felt I was old, but now I watch the movie, I look so young and pretty,” she said to Ilgan Sports, an affiliate of the Korea JoongAng Daily.

Q. What made you decide to do this movie?

A. I initially hesitated because I wasn’t sure if I wanted to emphasize that I’m an actress in her 40s. However, I also thought it might be good to talk honestly about the experiences women my age go through.

How did you sympathize with your character, Shin-hye?

I like how she focuses on work and getting married is not a goal. There is line she says, “I will be busy in the future supporting myself,” and I agree with it. It is something that gives courage to single women. Supporting oneself can be lonesome, but it’s also a great thing.

Did you like that she was a producer of entertainment programs?

I got tips from producers. Shin-hye is short-tempered with her bosses and subordinates when she doesn’t like how work turns out. To be in that position, she must have had some fierce competitions with others.

Haven’t you also strived to become an all-round entertainer?

I have never taken a day off in the past 10 years, living as a singer and actress. I have just worked because I like it. As I enter my 40s, I wonder if I should put more effort into living my life.

What would you do if a younger man approached you, like in the movie?

I think there is nothing wrong with dating a younger man, but it would be hard to see a future with him. When Shin-hye tells her younger boyfriend that she wants to break up, I really sympathized.

What does it mean to be over 40 years old for a woman?

Back in my 20s, I thought I couldn’t do anything once I was over 40. However, now I’m at that age, I feel like it is time I can start something new. It is true that I am not getting prettier, but as long as you live life diligently and positively, things are going to be okay.