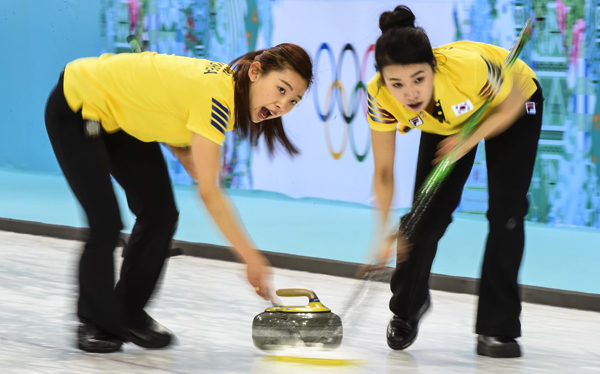 Lee Seul-bee, left, and Um Min-ji sweeping ahead of the stone in the 10th end of the curling game versus Denmark on Sunday in Sochi, Russia. [XINHUA/NEWSIS]

With the women’s curling team’s loss to Denmark, 7-4, on Sunday, it looks like their first Olympics is pretty much at an end. With one more game to play as of press time, against undefeated powerhouse Canada, but with just three wins and five losses, the chance of advancing is almost nil.

In Sunday’s game against Denmark at the Ice Cube Curling Center, Korea had a 2-1 lead after the fifth end, but Denmark scored two points in the sixth and three more in the seventh, putting the game out of reach.

“We did our best to make a good outcome in Sochi,” said the team’s captain, Kim Ji-sun, after the game. “But I think we learned many things here. We have to wait for another four years to compete in the Olympics, but we will be on the ice with improved skills. I think the loss on Sunday has ended our journey in Sochi, but that made us start to dream of Pyeongchang [the 2018 Winter Olympics].”

The Korean women’s team did manage to beat Japan in their debut game, and they took down Russia before soundly thumping the United States yesterday.

The five-woman team has had a rough road to Sochi. The national team launched only 12 years ago, playing a sport that is little known and respected in Korea.

Dwindling public support has discouraged the players. In 2008, most of the members of the Gyeonggi Province Curling Team quit playing. “It was frustrating to see them leaving,” said 36-year-old veteran Shin Mi-sung.

A year later, Jeong Yeong-seop, the team’s coach, started recruiting talented female curlers from across the country. He first approached Lee Seul-bee, who was about to end her career.

“Most of my [curling] teammates from high school left for college at that time,” Lee recalled. “But I couldn’t give up. Though I worked in a nursery school part time, I always dreamed of playing curling.” Lee, the lead of the national curling team, not only achieved her dream but has also emerged as an Internet celebrity, thanks to her great looks.

Although they finally formed a team, more obstacles were waiting for them.

As the country did not expect the curling team to win a medal in the Olympics, they were not able to practise at the Taereung training center, where national-level athletes prepare for the Games. Instead, they had to stay in the nearest motel, eating cheap take-out.

But their efforts finally paid off. At the Ford World Women’s Curling Championship in March 2012, the women’s team not only succeeded in advancing to the playoffs for the first time but also made it to the semifinals, surprising many analysts and fans.

In November, the team won the Pacific-Asia Curling Championship in Shanghai, followed by the silver medal in the Winter Universiade, held in Trentino, Italy.

Such outcomes could not be replicated in Sochi, but Kim said she thinks this is just a beginning. “I think we are the very beginning of Korea’s curling history,” she said. “We will respond to the nation’s expectations in Pyeongchang and we will never stop working hard to accomplish that goal.”