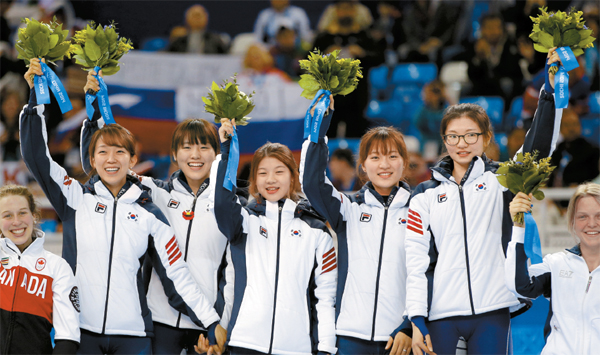 The Korean women’s short track speed skating team celebrates its win in the 3,000-meter relay during a flower ceremony yesterday at the Iceberg Skating Palace in Sochi, Russia. [AP/NEWSIS]

The Korean team, consisting of Gong Sang-jeong, Kim A-lang, Cho Ha-ri, Shim Suk-hee and Park Seung-hi crossed the finish line first with a time of 4:09.49. The gold medal is Korea’s second at the Sochi Games.

Korea was in second place until the very last moment, but 17-year-old rising star Shim made a beautiful turn in the last corner that gave Korea the lead. Shim celebrated the win immediately after she crossed the finish line with tears in her eyes. It was Korea’s first gold in the relay in eight years.

Korean fans’ hopes of winning the first gold in a short track event were higher than ever as both the men and ladies’ teams have struggled in Sochi.

“We wanted to present good outcomes to the nation, which has been supporting us greatly,” Shim said in a post-race interview. “We will try to stay in good shape, just like we did today for the next rounds.”

The five women celebrated their victory with the Taegeukgi (Korean national flag) in their hands.

Park won the bronze medal in the 500 meters and Shim won the silver in the 1,500 meters last week, but that didn’t satisfy the nation, which became accustomed to gold medals in previous Olympics. The Korean women’s team has also been dominant in the 3,000-meter relay as it has won four of the past five Olympics, except for Vancouver in 2010.

The male skaters have struggled even more than the women. They haven’t claimed any medals, while their former teammate, Ahn Hyun-soo, now Viktor Ahn of Russia, won two medals last week - gold and bronze - after changing his nationality following a controversial power struggle within the Korea Skating Union.

The ladies shined in the heats for the 1,000 meters, too, as Park, Shim and Kim advanced to the quarterfinals. Park, the bronze medal winner in the 500 meters, won Heat 2 with a time of 1:31.88 and Shim, the silver medal winner in the 1,500 meters, also easily advanced by winning Heat 4 in 1:31.04. Kim won Heat 5 with a time of 1:31.64. All three took the lead early in each race, mostly with six to seven laps to go, and never allowed their competitors to catch up. They dominated the races with their speed and sharp turns on the corners.

Two male skaters who wanted desperately to wake up from their nightmare in Sochi also advanced to the quarterfinals in the men’s 500 meters yesterday.

Park Se-young, the younger brother of Park Seung-hi, won Heat 1 with a time of 41.56 seconds. He got off to a quick start and positioned himself in a good spot to win the race more easily.

Veteran Lee Han-bin had a bit tougher race than Park in Heat 3 as he failed to make a quick start. Lee finished the race in second place with a time of 41.98 seconds and China won the group. It looks like the two are likely to face Viktor Ahn again in the quarterfinals. Showing off his excellent cornering skills and speed, Ahn won Heat 5 in 41.45 seconds.