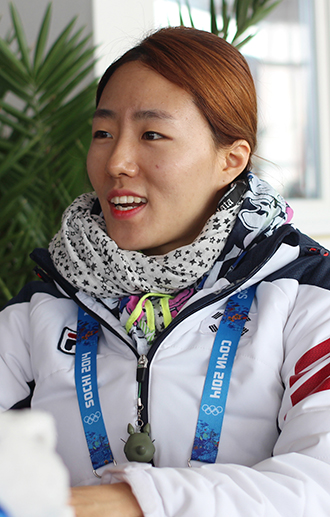 Days after the women’s 500-meter final in the Sochi Winter Games, Lee Sang-hwa, the two-time Olympic speed skating champion, finally seemed to enjoy the Russian city without any pressure. On Feb. 11, she successfully defended her title and set a new Olympic record.

As fearless as she may seem on the rink, the Olympian conducted herself like an ordinary 24-year-old woman when she met Ilgan Sports, an affiliate of the Korea JoongAng Daily, near Olympic Park, Sochi.

A. I have been enjoying my vacation at the Black Sea. Sometimes I went to the other Korean players’ matches with figure skater Kim Yu-na. Nothing special.

Many people say that you became more mature and feminine compared to the 2010 Vancouver Games. How do you feel?

I appreciate the compliments. Four years is a long time. I’m in my mid-20s, and I’ve lost some weight.

Are you still on a strict diet?

Yes. As long as I race on the ice, I will continue to be on one. Besides, it’s very normal for athletes to be on a strict diet. I used to feel under huge pressure when my coach told me to eat less [when I was young]. Sometimes it made me eat more, just to release the stress. But now I just want to sleep more and get some good rest. Throughout the last season, I wasn’t able to sleep for more than four hours. Too much thinking made me sleepless.

How is Sochi different from Vancouver?

Well, to be frank, I am not very fond of Sochi, not as much as Vancouver. Vancouver gave me the most meaningful memories of my entire life. The beautiful scenery, festive atmosphere and my achievements there were all too good to be true. But I’m not quite sure about Sochi. The Black Sea is great, but news reports about terrorist attacks in Russia scare me.

You looked somewhat nervous during the race. How did you feel?

Of course I was. I was especially affected by Olga Fatkulina of Russia, who did a remarkable job in the first race. Then I started to worry about whether I would make any mistakes in my own race.

How did you feel when you finished the second race and learned that you were the champion again?

I felt like, “I did it! I finished!” It was as thrilling as my first triumph in Vancouver.

Who did you first think about after you won?

My parents. They dedicated everything to support me over the years. Without my family, I would never have been able to come this far.

When you trained with male speed skaters for the Games, it surprised many people. What did you gain by such training?

Thanks to the training with the male speed skaters, I was able to realize that I have a long way to go. Their fast speed motivated me to train even harder. And that definitely contributed to advancing my ability.

You were the reigning champion in Sochi compared to Vancouver in 2010, where you were challenging the champion. What was the difference?

After winning the gold medal in the 500 meters at the Vancouver Games, I thought taking part itself would be enough in Sochi; winning wasn’t my top priority at first. But as the Sochi Games loomed closer, it was hard to control my mind. I once again felt that I wanted to win. After all, it’s a competition.

What was your biggest challenge at the Sochi Winter Olympics?

The mental pressure and dealing with people’s high expectations were my biggest enemy. I was definitely confident that I could do well, but at the same time I knew that it would not be an easy way to go. Winning silver and bronze in women’s skating is harder than people think. But at home, Koreans only recognize the gold. I know this by experience; after grabbing gold at the Vancouver Olympics in 2010, people expected more gold to come in the following championships. When I only got silver or bronze medals, I couldn’t smile. Perhaps the expectations went too high after 2010.

What do you think about Korea’s expectations for gold medals in the Olympics?

When I saw Dutch skater Margot Boer smiling happily after she won the bronze medal in the women’s 500 meters, I wondered if I could have been the same. The answer is, of course, no. Korean sports culture has always focused too much on the champion, neglecting the rest of the athletes.

Every Olympian has trained so hard for the past four years. I wish we could all celebrate such efforts and tell them that they did a wonderful job regardless of the color of their medals.