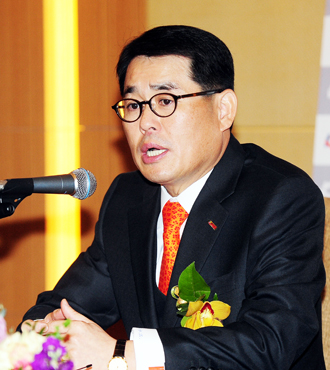 The Korea Ladies Professional Golf Association has been accused of selling tournament broadcast rights that fattened its own coffers at the expense of sponsors, advertisers and golfers.

KLPGA tournaments had been broadcast by both SBS Golf and J-Golf since 2011, and the association had hired an outside representative to conduct broadcast contract negotiations to guarantee a transparent process. This year, the association negotiated with bidders directly.

Instead of a secret ballot, which the association traditionally used, Koo suggested in a February board meeting, “Why don’t we just sell them to the one who pays the most. Let’s have a show of hands.”

“We couldn’t say anything against Koo’s suggestion due to the awkward atmosphere in that meeting room,” said an executive-level participant who requested anonymity.

“Everyone in that room knew that anyone who spoke up would be branded as a rebel.”

“The LPGA of the United States and the Japanese LPGA never directly negotiate with bidders,” said a former high-ranking KLPGA official. “It looks like they even begrudged [the contract negotiator] the money they paid him.

“I can’t understand why the association is trying to hoard more and more money in its safe. They were already publicly humiliated in 2011, when so many high-ranking officials fought for the finance director post that manages the association’s funds. That incident eventually forced the association’s chairman to step down from the post, but I think they didn’t learn anything from that scandal.”

He added that the price SBS Golf paid was way too much and that it would adversely impact Korean ladies’ golf.

Since SBS Golf became the exclusive KLPGA channel, frustration has grown among the many sponsors and golf equipment manufacturers that commit tens of billions of won to tournaments as part of their marketing strategy.

“We can’t find a reason to spend 1.5 billion won per year to sponsor tournaments that only air on one channel,” said the spokesman of a KLPGA sponsor. “We are seriously considering ending the sponsorship.”

Disgruntled sponsors aren’t the only problem. Since SBS wants to make a return on its investment, the network raised ad rates for its golf channel and angered advertisers.

“The season hasn’t begun yet, but the markup on advertisement rates is huge,” said a marketing director for a golf equipment brand. “It looks like the KLPGA is only interested in enriching itself and doesn’t care about the golf goods industry.”

The father of an active golfer also complained about the decision.

“It’s not good for players, either,” he said. “Fewer channels for tournaments erodes the promotion effects for sponsors. It means they might cut their sponsorship of individual golfers. It looks like the association, seeking immediate gains, may have killed the goose that lays the golden egg.”

The KLPGA board is also under fire for interfering to reduce the penalty for Lee Jung-yeon, chairwoman of the KLPGA Players Association. Lee was sentenced to a two-year suspended jail term in December for assaulting a police officer after refusing to take a sobriety test.

At the time, the KLPGA banned Lee for two years and fined her 10 million won.

But the punishment became just a slap on the wrist less than two months later when the KLPGA board ordered the committee that determined Lee’s punishment to reduce her two-year ban to three months.

Lee’s probation now ends March 22, allowing her to play during the KLPGA’s 2014 season that tees off in April.

In accordance with KLPGA regulations, a golfer who has violated the law or demeaned other KLPGA members’ dignity is subject to a tournament ban of six months to five years.

“I can’t understand why the association is willing to give her a chance this early,” said one player, on condition of anonymity. “Many of us currently don’t want to see her on the course, because she didn’t apologize to the public after the incident.”