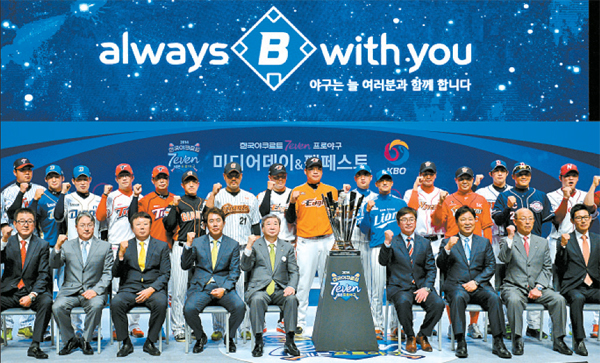 Since Korea Baseball Organization teams can have at least one foreign hitter in their lineups starting this season, those imported bats are expected to produce more home runs, and fans in the stands are considered key components for a successful season. And as the two-week preseason wraps up, some of these new foreign sluggers have been a hit, while others look like they need more time to adapt to their new league.

The most impressive imported bat has been Felix Pie of the Hanwha Eagles. The former member of the Pittsburgh Pirates looked to be in mid-season form, hitting .419 with four home runs and eight RBIs.

Pie was tied with outfielder Jeong Eui-yoon of the LG Twins for the preseason home run lead and tied for third in RBIs.

The Eagles didn’t expect those kinds of numbers from Pie, whose career Major League slugging percentage was only .369, but he more than doubled that to .871 with six of his 13 preseason hits going for extra bases. The Eagles project him as hitting third in the batting order ahead of first baseman Kim Tae-kyun in the cleanup spot, followed by Choi Jin-haeng in the No. 5 position.

Eric Thames of the NC Dinos is another foreign hitter attracting attention. Thames finished the preseason fourth in hitting at .347, good news for a team that finished last in 2013 with a .244 team batting average. Thames, who played briefly with the Toronto Blue Jays and Seattle Mariners, is expected to lead the team’s offense along with veteran Lee Ho-joon and outfielder Na Sung-beom.

Fans’ offseason attention was focused on Luke Scott of the SK Wyverns, who has the best MLB resume ever (135 home runs in 889 games) for a foreign player coming into the KBO after Julio Franco. Scott hit two home runs and had eight RBIs during the preseason, while demonstrating his ability to get on base with nine walks. His batting average was only .267, but his on-base percentage was .425. The Wyverns expect Scott to be one of their hitting leaders with star third baseman Choi Jung, who finished third in home runs in 2013 with 28.

Yamaico Navarro of the Samsung Lions also had a good preseason. Though producing only one home run, Navarro batted .316 and that suits the power-laden Lions just fine. Samsung is the defending KBO champions and the middle of their batting lineup is filled with sluggers like outfielder Choi Hyung-woo, third baseman Park Suk-min, infielder Chae Tae-in and first baseman Lee Seung-yeop. The Lions expect their new foreign second baseman to play strong defense and get on base for the big bats that follow.

Jorge Cantu of the Doosan Bears, who hit 109 MLB home runs, looked like he was not in playing shape. Though he batted .300 in four preseason appearances, he had no extra base hits. Manager Song Il-soo often sidelined him due to minor injuries, but he expects Cantu to be a hitting leader during the regular season, along with star left fielder Kim Hyun-soo.

Josh Bell of the Twins, Vinny Rottino of the Nexen Heroes and Brett Pill of the Kia Tigers are the three players who raised their managers’ eyebrows and blood pressure.

Bell hit only .160 in nine games and Rottino .167 in seven games. But the worst was Pill, who hit an anemic .121 in 10 games and consistently swung at bad pitches. He went 0-4 against the Twins on Sunday, but many analysts predict that Pill, who hit .344 and 18 home runs in the U.S. minor leagues last season, will be a decent hitter if he adjusts to KBO pitching and starts to make contact.