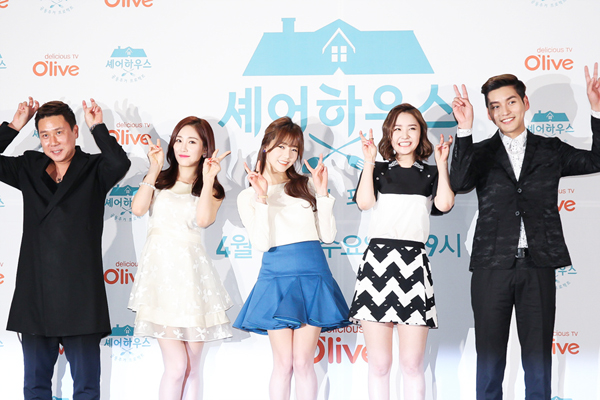 Cable channel Olive TV has launched “Share House,” a new reality TV show that films a handful of celebrities living together in one home.

“The main object of the show was to provide a new definition of family,” said Lee Soo-ho, the producer of the program, at a press conference held at the CJ E&M center, western Seoul, on Monday.

“I wanted to reflect the time period where the number of single households exceeds 4.5 million. By cooking meals together and sharing them, we hope that members will be able to receive the warm and caring hands that when living alone is not common.”

Lee Sang-min, a former member of Lula, the eldest member of the show’s cast, said he wanted the celebrities to share not only their daily lives but also their hidden troubles, so that they can overcome them together. “I told the others that I have gone through troubles of all sorts from level one to 20. So by mingling together, I hope that I can give them advice and help.”

“I wanted the viewers to think ‘I want to live there, too!’ and that’s why I gathered people that are likely to be around us. We escaped the imperative idea that variety show has to be ‘fun,’ and tried to serve our initial purpose,” said producer Lee.

The episode airs every Wednesday on Olive TV starting today at 9 p.m.