Noh atop 3rd round leaderboard at Zurich Classic

Noh atop 3rd round leaderboard at Zurich Classic 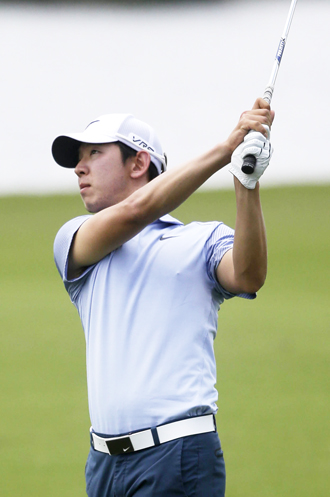 Noh Seung-yul of South Korea hits on the 18th fairway Friday at the Zurich Classic in Louisiana. [AP/NEWSIS]

If Noh Seung-yul can hold on to the lead in the Zurich Classic, he’ll do it front of fans who can appreciate how much bigger Noh’s mission is than simply winning his first PGA Tour event.

Wearing yellow and black ribbons on his hat to honor victims of the April 16 South Korean ferry accident, Noh used a string of birdies late in his round Saturday to surge two strokes ahead of Keegan Bradley atop the leaderboard.

It is Noh’s first career lead through three rounds on the tour, but finds himself representing - and captivating - a nation mourning the more than 300 dead or missing, many of them students, from the sinking of a ferry in the waters off his home country.

No player has completed all four rounds on the course at better than 20 under, the score Billy Horschel posted last year, when he became the sixth player in the last nine years to secure his maiden PGA Tour triumph in New Orleans.

Noh will try to continue the trend when he tees off in the same group as Bradley, who is no stranger to winning. His three career tour victories include a major in the 2011 PGA Championship.

Bradley said he doubted that he would intimidate Noh, but added, “It is definitely hard getting your first win.”

Bradley began the day tied for seventh at 9 under. He pulled into a tie with Noh for first on No. 15 with his seventh birdie of the day.

Bradley also shot 65, making eight birdies. He made one bogey on the par-3 ninth hole, when his ball landed left of the green, rolled down a bulkhead lined with cypress planks and into a water hazard from which alligators have been making routine appearances this week. It didn’t faze him, though.

“I’m most proud this week of where I’ve been mentally on the golf course and how calm I’ve felt,” Bradley said. “I love being in this position, a couple back going into Sunday. I’d like to be a couple in the lead, too, but I love chasing.”

Robert Streb was third, three shots back after a 68. Paul Casey’s 64 was the day’s best round. He moved up to a tie for seventh with Charley Hoffman at 13 under.

Noh is in his third year on the tour, but finished outside the top 125 on the money list last season, forcing him to play in Web.com Tour Finals events to retain his tour card.

“Very disappointed in the whole season last year,” Noh said. “I learned from that time. ... So I’m very ready for tomorrow.”

He had never before been higher on the leaderboard than tied for second through three rounds.

That happened once at the 2012 AT&T National, but he shot a 2-over 73 in his final round to finish tied for fourth, his best finish in 77 previous PGA Tour starts.