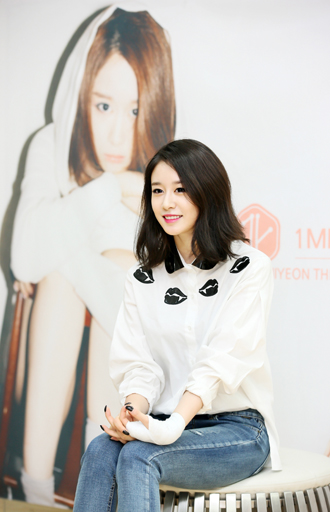 Park Ji-yeon from the six-member girl group T-ara unveiled her first solo mini album “Never Ever” yesterday at noon along with the music video for its lead-off track “1 Min 1 Sec” that is produced by acclaimed music director Double Sidekick.

The album that consists of three tracks deviated from T-ara’s original cute and lively image, but was filled with sensual and provocative melody and lyrics. The music video for it also showed Park dressed in a tight and revealing black outfit dancing suggestive moves.

“I’ve finished 99 percent of the preparation,” Park said enthusiastically at a press conference held on Monday at Core Contents Media in southern Seoul. “I want to go on a stage right away to fill up that remaining 1 percent.”

“Of course I was anxious about putting on a sexy image,” Park continued. “But it’s not just about being sexy. There is also a mannish aspect.”