Will Son shine in World Cup?

Will Son shine in World Cup? 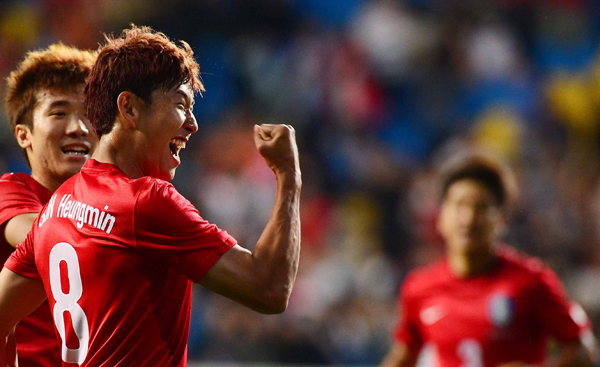 Each time a World Cup is staged, media outlets, analysts and fans play a game in which they try to pick the next rising star. Of the 23 Taegeuk Warriors, several young players are drawing the public’s attention ahead of the 2014 Brazil World Cup, especially midfielder Son Heung-min of Bayer Leverkusen, who will play in his first World Cup.

However, many analysts say the 22-year-old Son is a double-edged sword.

When he’s having a good day, fans will witness Son score more than one goal in a match and display great speed and shooting ability, which has led many German media outlets to give him the nickname “sonsational.”

But when he isn’t in his best shape, it is sometimes hard to even notice him on the field. In order to help fans watch Son rising in Brazil, Ilgan Sports, an affiliate of the Korea JoongAng Daily, took a closer look at Coach Hong Myung-bo’s left winger.

Son has repeatedly said that his role model in football is Cristiano Ronaldo of Portugal and like Ronaldo, Son’s dribbling ability shows when he finds the space to penetrate the opposition’s defense, especially in counter-attack situations. But he sometimes shows difficulty in overcoming his opponents’ narrow defense blocks.

“The speed of Son running forward with the ball is the best in the national team,” said Na Seung-hwa, who coached Son in Yukmingwan Middle School. “There is not much difference between running with a ball and without a ball for him.”

“He is born to score and is a player who doesn’t miss scoring chances,” Na said. Out of the 30 goals he scored in the Bundesliga, 26 were made from inside the penalty box while the rest were mid-range shots.

Some say that Son has a lot to learn in his passing, but it seems like he has made progress toward good passes since the 2012-13 season. In the past season with Leverkusen, he made seven assists and on the national team he has made two assists to striker Park Chu-young.

In Hong’s 4-2-3-1 formation, Son had been the coach’s first left-wing option in many previous friendly matches, and it looks like Hong made a good call. Son has been tested in the center-forward position five times on the national team but failed to score and also failed to make an assist. His six A-match goals were made when he was playing left wing.