Taegeuk Warriors arrive for the fight

Taegeuk Warriors arrive for the fight 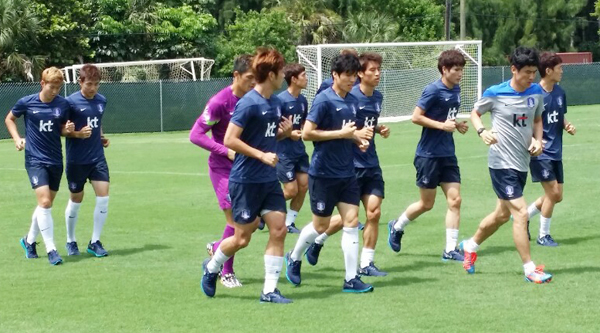 Wrapping up the final training in Miami on Tuesday, the 23 Taegeuk Warriors arrive at the battlefield in Brazil yesterday. [NEWSIS]

FOZ DO IGUACU, Brazil - After a disappointing 4-0 loss to Ghana on Tuesday, the Korean national football team arrived at Foz do Iguacu, a city in southwestern Brazil that is famous for its beautiful tourist attraction, the Iguacu Falls. The city will serve as Korea’s base camp during the 2014 Brazil World Cup, which kicks off early tomorrow morning Korea time.

At the Foz do Iguacu International Airport, a large banner was hung to greet the Taegeuk Warriors with the words “Korea Fighting,” written in Korean.

The Korea Football Association chose the city to be the team’s base camp in February last year. Out of 32 participating nations, Korea is the only country that will be staying in Foz do Iguacu during the event. The JoongAng Ilbo took a brief tour of the camp to see the training facilities and accommodations as a preview of the team’s journey in Brazil.

The team will stay in the Bourbon Hotel, which is only about 10 minutes from the airport. It is a five-star resort that costs 1,000 to 1,200 real (about 450,000 to 500,000 won or $500) for one room per night. It also has a mini football field, a spa, a swimming pool and a fitness club. It was previously a favored hotel by Brazilian football stars such as Rivaldo and Roberto Carlos.

Korea had spent two weeks training at the Bourbon Hotel in January last year and has requested more equipment for the players, including new fitness machines and a separate private cafeteria. Starting today, civilians and media will not be allowed to access the hotel.

The Flamenco Training Field is about five minutes from the resort. There, the KFA has set up a media center it calls the Korea House and its entrance gate is fully decorated with the taegeukgi (the national flag) and handwritten messages sent from fans.

It looks like the KFA has built a copy of the National Football Training Center in Paju, northern Gyeonggi.

The city is located in the middle of the three cities where Korea will have its three Group H matches against Russia on June 18 (Cuiaba), Algeria on June 22 (Porto Alegre) and Belgium on June 26 (Sao Paulo). It takes about an hour and 10 minutes to two hours to reach each field via airplane. The team will head back to Iguacu after the match against Russia and will do the same for its other matches.

The KFA said Korea will travel a total distance of 5,152 kilometers (3,200 miles) for the three matches, which is the ninth shortest traveling distance out of 32 participating nations, but it’s the longest in Group H. Belgium only needs to travel 1,984 kilometers, while Algeria will fly about 3,992 kilometers and Russia will travel 4,303 kilometers.

The United States has the worst travel schedule for which they must cover a total of 14,326 kilometers. They also face strong opponents such as Germany, Portugal and Ghana.

It looks like the Taegeuk Warriors are in good hands, but the question remains whether they can bounce back by Wednesday to deal with Russia. Korea faced a similar scenario in the 2010 South Africa World Cup. In a friendly match against Belarus on May 30 that year, Korea lost 1-0 and also lost their center defender Kwak Tea-hwi to injury.

“When the team had breakfast a day after Kwak went back to Korea, they lapsed into a lethargic silence and no one in the cafeteria spoke,” an official of the KFA recalled. “It was only a week before the first match against Greece.”

To get the team into battle mode, Assistant Coach Jung Hae-sung tried to rouse the depressed players during training, saying, “Do you even recognize which event you are in? What the hell are you guys thinking?”

After lashing out at the players, Jung talked about their feelings. He spoke with veterans such as Park Ji-sung and Cha Du-ri, and then encouraged them to help the younger players.

Four days after the Belarus match, the national team had their final warm-up against Spain. They lost 1-0 again, but their performance was much better. Korea regained their confidence from that match and advanced to the second round in the World Cup.

According to sources, the current mood of the national team isn’t so different from the time after the loss to Belarus, meaning that the coaching staff must work to encourage the young players. Some may struggle, but helping the athletes get out of a slump should be the coaches’ focus.