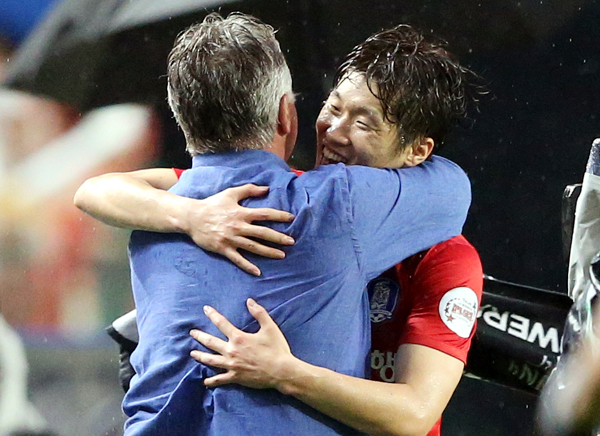 Coach Guus Hiddink, who led Korea to the semifinals in the 2002 Korea-Japan World Cup, will manage a team in the 2014 K-League Classic All-Star Game.

The match will be played between the K-League All-Stars and Team Park Ji-sung, which the league decided to create to commemorate Park’s impressive 25-year career and provide a fun game for football fans. The All-Star Game will be held at World Cup Stadium in Sangam-dong, western Seoul, on July 25 and Hiddink will coach Team Park Ji-sung, the league said Tuesday.

Park was a member of the 2002 World Cup squad and became one of Hiddink’s favorite players. After the Cup, Hiddink became coach at PSV Eindhoven in the Netherlands, where he gave Park his first chance to play in Europe. After successful seasons in the Netherlands, Park moved to Manchester United. Park and Hiddink have kept a close relationship ever since.

“Coach Hiddink will lead my team in the All-Star Game,” Park said in a press release from the K-League. “I heard that he is collecting some players to join the team.”

Hiddink and Park also teamed up in the 2012 K-League All-Star Game and recreated a celebration that Park performed when he scored the winning goal against Portugal in the 2002 Cup. He ran from the goal area and threw himself into Hiddink’s arms.

“I made that performance because the game was between the 2002 World Cup squad and the 2012 All-Star members,” Park recalled.

Fans are getting excited to see their favorite players, including those who did well in the Brazil World Cup, play in the All-Star Game.

Forward Lee Keun-ho of Sangju Sangmu Phoenix, who scored a goal against Russia, is expected to be selected for the All-Star squad and goalkeeper Kim Seung-gyu of the Ulsan Hyundai Tigers, who shined against Belgium with seven saves, is leading the fan voting.

The league is selling early bird tickets at a 25 percent discount until July 13 on www.ticketlink.co.kr and on its mobile app.