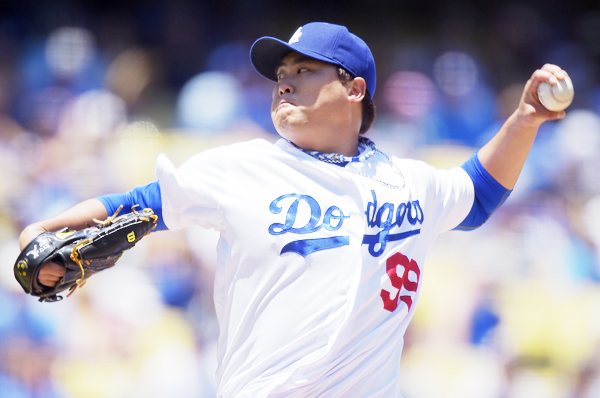 Dodgers starting pitcher Ryu Hyun-jin throws during the first inning Sunday against the San Diego Padres in Los Angeles. The Dodgers won, 1-0, to move ahead of the San Francisco Giants in the National League West. [AP/NEWSIS]

Ryu Hyun-jin finished the first half of the season strong Sunday with six scoreless innings of work against the San Diego Padres for his 10th victory and a 1-0 Los Angeles win.

At Dodger Stadium, the 26-year-old Korean left-hander used sharp sliders and curves to strike out 10 Padres hitters, shaking off the nightmare of his previous start in Detroit in which he was hammered for seven runs in two and a third innings in a 14-5 loss.

Sunday’s performance not only kept Ryu on pace to win 20 games in his rookie MLB season, but it put the Dodgers in first place in the National League West by one game over their biggest rival, the San Francisco Giants.

Yasiel Puig, who was ejected Saturday for arguing a strike call, hit an RBI single in the bottom of the sixth after Dee Gordon reached second with a single and his MLB-leading 43rd stolen base of the season.

Ryu opened the K-show by striking out Denorfia with an 88-miles-per-hour slider and retired all 11 batters he faced until Carlos Quentin’s two-out single in the top of the fourth. He struck out two hitters in each of the first three innings. The Padres’ only other hit against Ryu was a leadoff single by Alexi Amarista in the sixth.

“I’m happy I was able to finish the first half with a win,” said Ryu. “But I don’t like my ERA for sure, because one of my goals for the season was an ERA under 3.00. I will focus on lowering my ERA in the second half, as that will give me more chances to win.”

Sill, there was some nail-biting for Ryu after he left the game.

J.P. Howell relieved Brandon League in the seventh with runners at first and second, and retired Brooks Conrad to end the inning.

Dodger closer Kenley Jansen struggled, walking Carlos Quentin and giving up a single to Yasmani Grandal before striking out Jake Goebbert and pinch-hitter Seth Smith to end the game.

Ryu became the third Dodgers pitcher to reach 10 wins after Clayton Kershaw (11-2) and Zack Greinke (11-5), the first time that has happened at the All-Star break since the New York Yankees finished the first half of the 2010 season with CC Sabathia at 12 wins and Phil Hughes and Andy Pettitte with 11 apiece.

Ryu is scheduled to make his next start against the Pittsburgh Pirates on July 22, Korea time.

The first-half finale was not so rosy for Choo Shin-soo of the Texas Rangers. Choo, who has been hampered by a sore ankle for more than a month that has relegated him as a designated hitter, was hitless in two at-bats off the bench against the Los Angeles Angels on Sunday, his 32nd birthday. Choo struck out as a pinch-hitter, leading off the top of the seventh with his team trailing 8-6. He later flied out to left as the Rangers lost, 10-7.

“Since the team has already lost so many players with injuries, I wanted to help even though my physical condition has been awful in the past two months,” Choo said. “I will focus on healing my ankle during the All-Star break so I can return strong in the second half.”