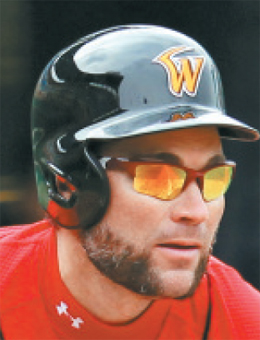 Just before Tuesday’s home game against the Hanwha Eagles at Munhak Stadium in Incheon, the 35-year-old, who had been sidelined because of a foot injury, arrived at the ballpark to clear out his locker.

He then approached Manager Lee Man-soo, who was watching the team’s practice on the field. For the first few minutes, the two looked like they were having a casual, good-natured conversation.

But a few minutes later, Scott’s face turned red and his voice grew so loud that even the reporters sitting in the dugout could hear him.

When asked what happened, Scott told reporters that Lee had argued with him about his methods for treating his injury.

“I played in the Major League for nine years,” he said. “I have a routine to treat my injury, but the team consistently asks me to follow their style.”

Generally in Korea, a club provides a rehabilitation program and schedule when a player is injured, though Scott refused to follow the regimen.

Lee attempted to get Scott to calm down, but he eventually gave up trying to communicate and walked over to the dugout.

“Scott has been sidelined for quite a long time,” the manager said. “I want to know that his entire body is fine.”

Scott only played 33 games this season because of injuries to his wrist, rib and foot. He has hit .267.

“It doesn’t really matter what the problem was,” the Wyverns said in a press release.

“Scott’s behavior on the field totally ruined the team’s mood, and it isn’t right to behave like that as a veteran player, therefore we decided to let him go.”

In each offseason, clubs in the Korea Baseball Organization (KBO) look to recruit at least one decent foreign player - an integral part of bolstering their rosters for the next season.

Once they find one, they generally offer a high salary as an incentive for them to come over to play, with the expectation that they will lead the team in pitching and batting.

When an imported player adapts well and meets the club’s expectations, they can quickly rise to stardom.

But imported recruits don’t always work out so well, and many foreign players fail to adapt to the league and eventually go back to their home countries.

Scott boasts an impressive MLB resume that includes 125 home runs, and was expected to lead the team’s offense.

His clash with Lee, however, was the final straw.

“It doesn’t matter how long and how he played in the MLB because it is all in the past,” one sports analyst said on the condition of anonymity.

“The power of the manager in KBO clubs is absolute, and many foreign players don’t recognize that. How Scott spoke to Lee is unacceptable in this country. If they can’t do something on the field, then they should at least try to adapt to the culture and the environment of the team’s club house.”

Others claim Scott already looked down on the KBO.

“All KBO clubs tell their players that the team is the most important thing, not individuals, and that’s why players follow all the requests by the team,” another analyst said on the condition of anonymity. “I think the Wyverns judged that just imposing a fine on Scott wasn’t enough.

“But one also has to wonder whether the Wyverns are communicating well with their foreign players. I also worry about how their new pitcher, Travis Banwart - who just arrived in the country earlier this month - interpreted that moment.”