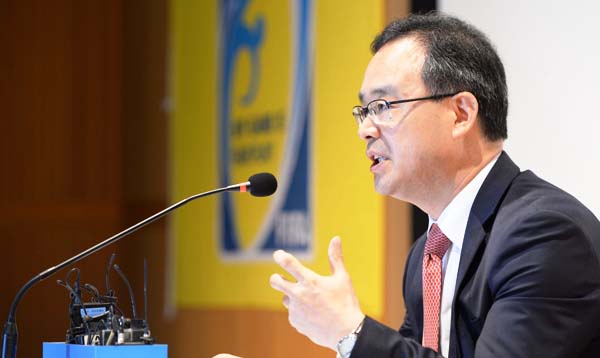 PAJU, Gyeonggi - The next coach to lead the Taegeuk Warriors will be a foreigner, the first to lead the national football team since 2007 when Pim Verbeek of the Netherlands resigned from the post.

Lee Yong-soo, chief of the Korea Football Association’s (KFA) technical committee, said in a press briefing held yesterday at the National Football Center in Paju, northern Gyeonggi, that after discussing with the committee who the KFA should hire, they cut the list from 47 to three, though they did not reveal the names. Lee added that KFA officials will start arranging meetings with those candidates next week to begin negotiating.

The following are excerpts from the press conference with the committee chief.

Q. Please explain how you decided on the final three candidates.

A. A total of seven committee members participated in the meeting and three said the new coach should be a Korean and the other three said we should hire a foreign coach. In order to get a clear idea, we discussed what the new coach must be capable of regardless of nationality. Preparing for January’s Asian Cup was the first goal, the Asian regional preliminary rounds for the 2018 World Cup was the second, and the World Cup after the preliminary rounds was the last to be considered.

Considering all those conditions, we concluded that we need someone who had made the Round of 16 in the Cup and someone who is younger than 66 right now because we thought the World Cup would be tough work for someone turning 70 four years from now. A total of 47 candidates - 17 Koreans and 30 foreigners - were reviewed and were narrowed down to three.

So Korean coaches are off the table for sure?

There was one Korean coach who fulfilled all conditions, but we decided not to work with him at this time.

Korea is scheduled to play two friendly matches in September. Do you think we can bring the new coach before that time?

There are two scenarios for that but considering that the new coach will not have enough time to study even if we hire him before September, one option is to set up a group of Korean coaches who will support the new coach prior to hiring him and then let them manage the matches. The other scenario is to ask a Korean coach to lead the matches temporarily.

Did the committee discuss the candidates’ salary?

We haven’t. I think the KFA might have to pay a bigger sum of money than they thought, but all the negotiation work is on the KFA. Under the circumstances, the negotiations might take longer than we think.

Based on the conditions set by the technical committee, the Korea JoongAng Daily found several candidates for coach: Bert van Marwijk (Netherlands); Raymond Domenech (France); Glenn Hoddle (England); Sven-Goran Eriksson (Sweden); Jorge Luis Pinto (Colombia); and Alejandro Sabella (Argentina), but it is likely that Eriksson, who received about 10 billion won ($9.74 million) from England, is too expensive and the coaches from South America don’t speak English.

The assumed salary for the new coach is predicted to be between 1 billion won to 1.5 billion won.