KFA officials go to Europe to talk with Dutch coach

KFA officials go to Europe to talk with Dutch coach 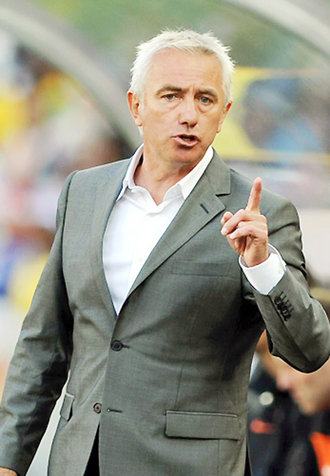 The sources said the proceedings were conducted in profound secrecy and that other KFA officials didn’t know about their departure. According to some officials, Jeon told his colleagues that he was going on vacation.

But rather than go on vacation, they headed to Amsterdam to meet Bert van Marwijk, one of three candidates the KFA is considering to lead the Taegeuk Warriors. Yesterday, multiple Dutch media outlets said the 61-year-old coach began negotiating with the Koreans after he couldn’t reach a deal with a club team. At the end of last month, technical committee chief Lee announced that the KFA had selected three candidates who met their conditions for a leader of the national team. Van Marwijk was on the shortlist along with Fernando Santos of Portugal and Jose Antonio Camacho of Spain.

Van Marwijk led the Netherlands to a second-place finish in the 2010 South Africa World Cup while Santos led Greece to the Round of 16 in Brazil this year and Camacho led Spain to the quarterfinals in the 2002 Korea-Japan World Cup.

According to a former KFA official who took part in negotiations with former foreign national team coaches, the talks generally are held in person.

“All they do before they meet a candidate is set up the meeting,” the former official said on the condition of anonymity. “We never ask whether he is willing to take the team on the phone or by email. Everything gets started after they see each other. Both of them definitely need some time to listen to each other’s opinions about the job and related matters including the salary of the coach.”

But the meeting with van Marwijk doesn’t guarantee that Korea will have a new coach soon because of the variables that could impact the contract.

“Negotiating the coach’s salary and the duration of a contract isn’t everything,” the former KFA official said. “We once reached a deal with a foreign coach years ago and we thought everything was finally done because the coach’s salary, which is considered the hardest part of negotiations, was solved. But hours later, he informed us that he couldn’t take the job, saying his family didn’t want him to work in Asia.”

He added, “It doesn’t mean that the KFA will have an announcement to make within days just because they are in the Netherlands. If the negotiation doesn’t work out well, they will head to another country that they probably have planned.”