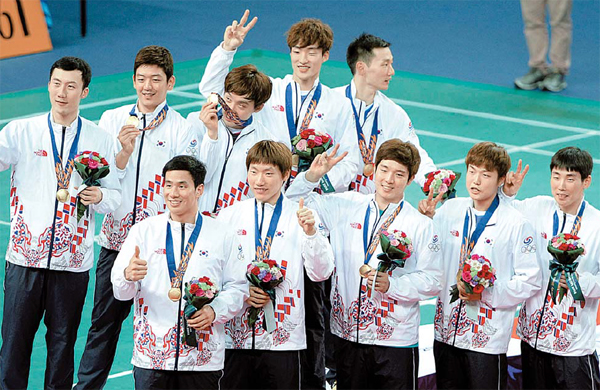 Team Korea celebrates its victory against China in the men’s badminton team final yesterday at the Gyeyang Gymnasium in Incheon. [NEWSIS]

Korea traditionally has been strong in badminton, but the country hadn’t won an men’s team gold medal at the Asian Games since 2002 in Busan. But 34-year-old veteran Lee Hyun-il and badminton icon Lee Yong-dae led the Korean national team to its first gold at Incheon by beating China on a game score of 3-2.

As soon as Lee Hyun-il won the match point at Gyeyang Gymnasium yesterday, Son Wan-ho, Lee Yong-dae, Lee Dong-keun and Yoo Yeon-seong jumped up and hoisted their teammate to their shoulders in celebration before the Taegeukgi (Korean flag) waving home crowd.

“Before the Asian Games, I worried whether I would be able to help my teammates as the oldest player on the team,” said Lee. “But I’m very happy that I was the player who won the gold medal point in the last game. I’m very proud.”

Korea beat Indonesia for the gold in Busan. The last time Korea defeated China in the men’s team event was in the 1986 Seoul Asian Games.

Korea wasted no time seizing victory in the next game. The world’s top-ranked men’s doubles team of Lee Yong-dae and Yoo Yeon-seong gave Korea a 2-0 advantage by easily defeating their Chinese opponents, 2-0 (21-18, 21-15).

There was huge pressure on the shoulders of Lee Hyun-il, yet he clearly showed he is a player with an abundance of experience in international events. There was no strong and fancy smashes, rather he mixed up many different types of shots to control the tempo of the game, then eventually ended the match with a game score of 2-0 (21-14, 21-18) to claim Korea’s first gold in the Asian Games in 12 years.

“I remember that I was so close to winning gold medals many times, but I failed to win many of them because I lost to the Chinese,” said Lee Yong-dae, a gold medalist in mixed doubles in the 2008 Beijing Olympics.

Lee won the silver medal at the 2010 Guangzhou Asian Games’ team event then took bronze in men’s doubles. “I’m very happy for winning a gold medal in the event that is held on our home soil,” he said.

Lee has gone through some tough times and two partners since his longtime favorite Jung Jae-sung retired from the national team after the 2012 London Olympics.

Lee and Yoo started working together in September 2013.

“I thought this Incheon event might be my last competition, so I played really hard and eventually won a gold medal,” Lee said. “I really want to thank my teammates, especially my partner, [Yoo Yeon-seong] who encouraged me every time I struggled.”