Weightlifter still will not give up

Weightlifter still will not give up 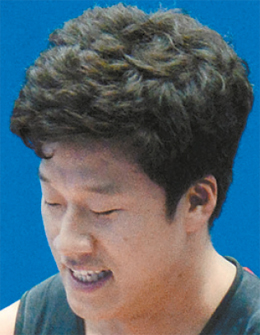 Since winning a gold medal in the men’s 77-kilogram event at the 2008 Beijing Olympics, Sa Jae-hyouk has been considered an icon of Korean weightlifting.

But after breaking his right elbow during the 2012 London Olympics, the 29-year-old went through a series of surgeries and painful rehabilitation programs to continue competing internationally.

Fans expected him to bounce back and the weightlifter wanted to make a dramatic comeback in the 2014 Incheon Asian Games being held on his home soil.

This dream, however, could not be realized.

In the men’s 85-kilogram weightlifting event held at the Moonlight Festival Garden Weightlifting Venue on Wednesday evening, Sa excited fans by lifting 171 kilograms (377 pounds) in snatch, a personal best, but he was disqualified in the Group A preliminary after failing to complete all three of his attempts in clean and jerk.

“I really wanted to make a nice comeback in front of the home fans, but things didn’t work out well,” Sa told the Korea JoongAng Daily yesterday. “I actually thought things were going in the right direction, but I suddenly felt my legs weren’t moving well. I once considered attempting 220 kilograms in the clean and jerk because I certainly performed better in it than the snatch in training. I’m very sorry to all the fans who have been supporting me.”

After having four surgeries from 2001-05, he won a gold medal in the men’s 77-kilogram event at the 2008 Beijing Olympics, then rocked the world by lifting a world-record 211 kilograms in the clean and jerk.

But he again suffered a series of injuries and missed a chance to compete in the 2010 Guangzhou Asian Games due to a surgical procedure on his shoulder, then his right elbow was hurt during the 2012 London Olympics.

People said the injury was so serious that it could jeopardize his career, but Sa never gave up.

“Giving up isn’t in my dictionary,” he said. “I had some difficulties preparing the event because I had different opinions over issues of training methods with my coach and there were several minor distractions,” said Sa. “I know people soon are going to say I had better retire from competitions, but I want to make my third Olympics appearance in two years.

“Once again, I want to apologize to all those people who have been expecting a good performance from me in the Incheon Asian Games, but I promise that I will prepare much stronger for the next competition.”