Dinos on the brink, but history on their side

Dinos on the brink, but history on their side 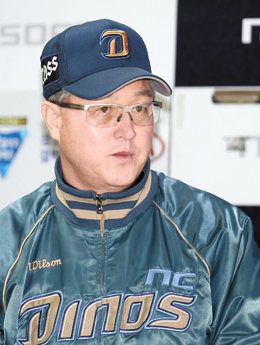 The NC Dinos finished third in the regular season to make it to the Korea Baseball Organization playoffs in only their second year of existence. But the team from Changwon, South Gyeongsang, is on the brink of elimination after losing the first two games of the opening-round series to the LG Twins at home.

The two teams took a day off yesterday as the best-of-five series moves to Jamsil Stadium, southern Seoul, for Game 3 tonight. The winner will move on to face the Nexen Heroes, the regular season runner-up, for the right to play the Samsung Lions in the Korean Series.

In Game 1 on Sunday, the Twins got off to a fast start - scoring six runs in the first inning - and never looked back in a 13-4 drubbing.

When Game 2 was delayed for two days in a row, Dinos fans were hoping it might change the momentum, but Jeong Seong-hoon and Brad Snyder each homered for LG Wednesday night in a 4-2 win.

Nonetheless, the Dinos still have a chance. In the seven years since the KBO adopted a best-of-five format, teams that won the first two games advanced to the second round two of four times.

And NC Manager Kim Kyung-moon was at the helm of the Doosan Bears in 2010, when they lost the first two opening-round games to the Lotte Giants, then won the next three.

It was the same story for the Bears against the Heroes last year.

The situation in 2010 was similar to the predicament the Dinos are finding themselves in this year, as Doosan dropped its two home games at Jamsil Stadium.

In the first game, Doosan allowed five runs by Lotte in the ninth inning, including a homer by Jeon Jun-woo, and lost 10-5.

The second game starred Lee Dae-ho, whose three-run home run in the 10th inning gave the Giants a 4-1 victory.

Tonight’s game will either be the end of the season for the Dinos or perhaps the start of another comeback by Kim.

Meanwhile, the Japan Series that begins tomorrow promises to be the first time two Korean players face each other in the country’s premier baseball event. They are Hanshin Tigers’ closer Oh Seung-hwan and SoftBank Hawks’ cleanup hitter Lee Dae-ho.

Oh, who moved to Japan from the Samsung Lions this year, was the top reliever in the Central League with a 2-4 record, 39 saves and a 1.76 ERA.

He pitched in all six games of the Climax Series to lead the Tigers to the Japan Series. He had four saves with a 2.15 ERA and was selected the series MVP.

The Climax Series consists of a best-of-five first stage between second- and third-place finishers during the regular season and the final stage, best-of-seven series between the first stage winner and the Central League champion. Hanshin finished in second place.

Lee, who is in his third year in Japan and his first with the Hawks, won a league championship for the first time in his career. He was with the Lotte Giants for 11 years and the Orix Buffaloes for two years.

He had the highest batting average - .400 - in the Pacific League’s Final Stage.

In the KBO, Oh used to have a tough time with Lee. Lee had eight hits in 25 bats, including three home runs, for a .320 batting average against Oh.

They also met once in Japan in an inter-league game in May and both of the 32-year-olds were happy: Lee hit a single, and Oh picked up a save.