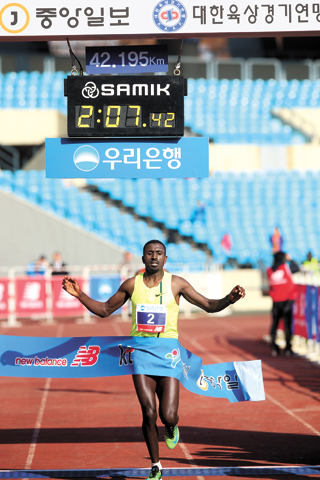 Ethiopian runner Feyisa Bekele Woldemikael was the first to cross the finish line yesterday in the JoongAng Seoul International Marathon, clocking 2:07:43, at the Jamsil Stadium in southeastern Seoul. By Kim Kyung-bin

A total of about 14,800 people attended the annual event, which was divided into three categories: Elite for professional runners, Masters for amateurs and Wheelchair for disabled participants. Competitors began at Jamsil Stadium, turned around in Seongnam, Gyeonggi, and headed back to the stadium.

Feyisa Bekele Woldemikael, a 31-year-old Ethiopian took first place, reaching the finish line in 2:07:43 in his first time running in the Seoul event. He won $50,000 in prize money. Defending champion James Kipsang Kwambai of Kenya, who won the title for three consecutive years, finished the race ninth with 2:11:31.

Woldemikael stayed in the leading pack with six other runners, including Kwambai, then pulled ahead of the group along with two Kenyans, Chebet Evans Kiplagat, 26, and Thomas Kiplagat Rono, 27, after 35 kilometers (21.7 miles). Runners’ times were recorded every 5 kilometers, and Woldemikael’s time between 35 kilometers to 40 kilometers was 14:53, the fastest among all contestants. He took the lead when after 40 kilometers and stayed ahead until the finish line.

“The weather and atmosphere were the best,” said Woldemikael after the race. “I’m glad to be the first Ethiopian winner in the JoongAng Marathon, after the Kenyans who have done great jobs. I’ll be coming back next year to keep the title.”

Yesterday he proved that he had regained his form after a right hamstring injury damaged his performances over the past couple years. After setting a personal best 2:06:26 at a marathon in Amsterdam in October 2012, he got slower, clocking 2:09:05 in Tokyo in October last year and 2:11:03 at the Dong-A Marathon in Seoul in March.

“I focused on rehabilitation and training more than anything for [the JoongAng Marathon],” said the champion. “I’ve run many courses in Seoul but I was most satisfied with this competition, and also it gave me hope that I can do it.”

Many amateur marathoners also competed. Among them was Jeong Mi-yeong, 58, who completed her 371st full marathon. She ran as a pacemaker and crossed the finish line just after four hours and 40 minutes.

“When I completed a full marathon for the 200th time, I was curious how long I would be able to keep running,” said Jeong. “This was my 371st, and I will not stop.”

She began running marathons in 2001, when she participated in the JoongAng Seoul International Marathon’s half-marathon and clocked 1:55:00. Jeong finished her first full marathon in 2002 and has run at least 30 a year since then.

“I’m not running to shorten my record but to enjoy,” she Jeong. “I work out from time to time and try to keep my 4:40 record. I also hope to encourage other people to revitalize their lives with running.”

In the wheelchair division of the race, Hong Suk-man of Korea came in first with a time of 1:33:59, beating Spaniard Rafael Jimenez, who passed the finish line at 1:34:01 just two seconds behind Hong.

Hong is a well-known disabled athlete.

He has won gold medals in the men’s 100-meter and 200-meter wheelchair races at the 2004 Athens Paralympics and added another in the 400-meters at the 2008 Beijing Paralympics.

“I am confident when I’m on the course,” said Hong. “We had many uphill sections, but I exercised during the summer and it took effect.”