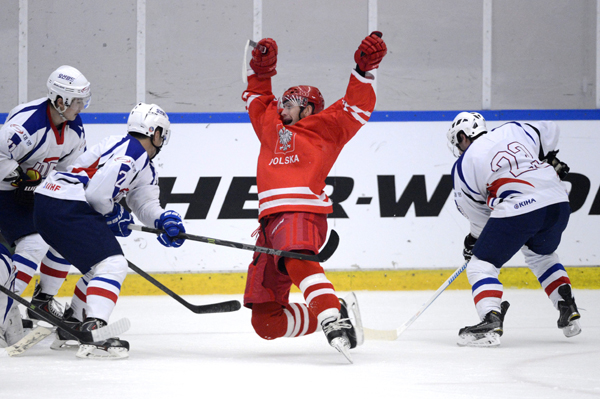 Jeong Wu-seong, left, and Ahn Jeong-hyeon, second from left, defend Sebastian Kowalowka of Poland in the last match of the Euro Ice Hockey Challenge in Budapest on Monday. [AP/NEWSIS]

The Korean team, ranked 23rd, beat 18th-ranked Italy on Sunday, 4-3, in a penalty shootout after losing to 19th-ranked Hungary, 6-1, on Saturday.

The team exceeded expectations given that Italy, Poland and Hungary are in Division I Group A of the International Ice Hockey Federation (IIHF).

Korea was relegated to the third-tier Group B after losing all five of its matches in Division I Group A at the IIHF World Championship in April.

As representative of the host country, the team is eligible to compete in the 2018 Pyeongchang Winter Olympic Games, but it was not competitive against other teams from Europe and North America.

That changed when Paek arrived in August. Though ice hockey is not popular in Korea, Paek’s career is as glorious as that of football legend Cha Bum-kun, who scored 98 goals in the Bundesliga.

Paek moved to Canada at the age of 1. He became the first Asian NHL player as a defenseman for the Pittsburgh Penguins in 1991, and won the Stanley Cup in 1991 and 1992.

“We are thinking we may not be able to come back to the national team if we don’t survive here,” said 27-year-old Shin Sang-woo of Daemyung Sangmu. “We can’t relax because we always feel like we are being tested.”

“Paek ordered us to watch NHL video clips, and he teaches us set plays,” said Shin.

“Two of the goals in the game against Poland were the result of strategy training,” said Park Woo-sang, the team’s captain.

Paek’s team often employs swarming tactics, in which all players join both the attack and defense, similar to the Netherlands’ total football tactics. In the match against Italy, even defensemen Kim Hyuk and Bryan Young had goals.

The coach also cheers up the players by telling them in his imperfect Korean: “Don’t think too much, enjoy the hockey. We are getting better every day, because we did good against Italy and even better against Poland.”

Park said his coaching style centers on what he calls his “three P’s,” which refer to passion, practice and perseverance. And he is about to add one more “P”: Pyeongchang.