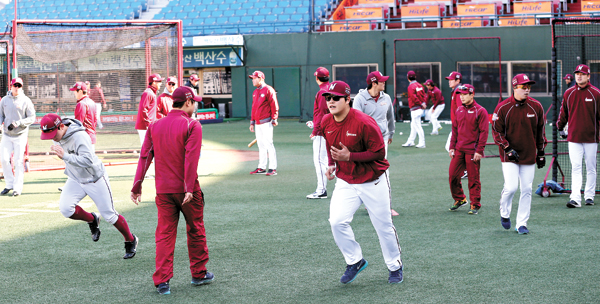 The Nexen Heroes work out on Nov. 2 at Mokdong Stadium, western Seoul, in preparation for the Korean Series against the Samsung Lions. The team is currently at the center of controversy: It was accused of holding an illegal training session on Friday. By Jung Si-jong

The Korea Professional Baseball Players Association (KPBPA) is investigating whether the Nexen Heroes held an official team training session on Friday, rekindling a debate over a regulation that bans mandatory training sessions from December to mid-January.

Questions surfaced following a media report on Monday that Nexen held a team training session on Friday with its coaching staff.

The association released a statement saying it was “furious about the training session” and that it will “dole out stern restrictions if the suspicion is confirmed.”

Nexen later explained that the players were working out on their own when coaches, who were at the stadium, went out to the field to watch.

“Are they saying we shouldn’t come to our office, too?” asked manager Yeom Gyeong-yeob.

The situation intensified Tuesday after a remark by the KPBPA secretary-general. “Nexen is actually a victim,” said Park Chung-sik. “The association is responding strongly because of Hanwha manager Kim Sung-keun, who requested a training session in December.”

Kim, who is known for his own style of hard training and has had similar problems with the association, scheduled a training session for Dec. 4, but canceled it due to strong opposition from the association.

He often scheduled training sessions in December when he was managing the SK Wyverns from 2007 to 2011.

Kim repeatedly stressed the importance of wrap-up training in December so the players can retain what they learned in November until spring training, which usually begins in mid-January.

The regulation was adopted to reflect the period when players are not under contract.

Player contracts typically run from February through November, and the association, clubs and players have agreed not to have any training during that time.

Spring training sessions for KBO teams usually begin Jan. 15 because the association permits early training if it is requested by players.

But the restriction on team training in December and January has long been a subject of debate.

Players who cannot afford to train on their own during the two months sometimes can fall behind top players who fly to foreign countries to continue their training. That situation has prompted criticism that the regulation favors high-paid players.

And this year, it’s become even more controversial since the association decided to apply the same rule to second-tier players and injured players.

Many second-tier players cannot afford individual training as well, and injured players who need to recuperate before spring training cannot get help from the club.