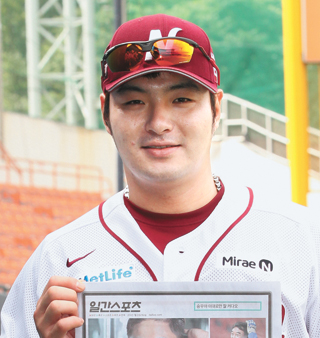 Nexen Heroes’ slugger Park Byung-ho on Thursday got probably his best Christmas present ever - a 40 percent raise in his annual salary.

Nexen announced that it concluded its salary contract with Park for next year, agreeing to pay him 700 million won ($636,000), up from 500 million won this year. The deal means Park is tied for the highest paid non-free agent.

The other highest-paid player, Choi Jeong of the SK Wyverns, who signed with his home team for the same amount a year ago, became a free agent this year and concluded another record contract with the Wyverns, deciding to stay for 8.6 billion won for four years.

Park deserved the raise. He hit 52 homers this year, leading the league in homers and winning the Golden Glove as a first baseman for three consecutive years. Though he wasn’t selected as the MVP this year, he had the best season of his career. His teammate Seo Geon-chang was the regular season MVP after recording 201 hits.

“I feel grateful to the club, manager, coaches and teammates for supporting me this year, because I could not have done well without their help,” Park said after signing his new contract. “I also appreciate the contract and I believe the amount of my salary reflects what the team expects of me as a key player. I promise I will work harder.

“I’m also happy that I could spend the full season without any injuries and my performance is getting better every year. I believe that was because the coaching staff took good care of me,” he added.

The Nexen Heroes advanced to the Korean Series for the first time this year, but lost the title to the Samsung Lions.

“I feel sorry that I could not perform well enough in the postseason,” the slugger added. “I’ll try my best to start the next season as a better player.”