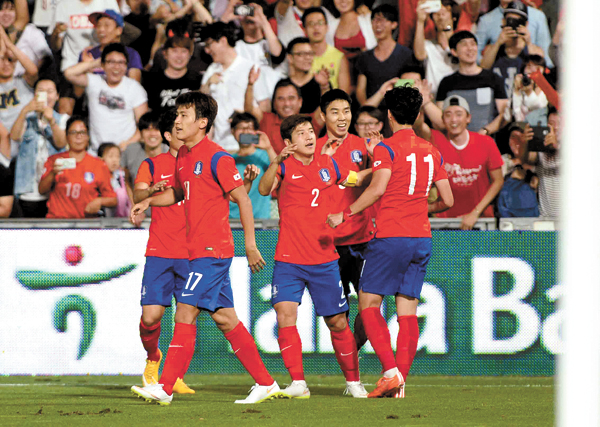 Lee Jeong-hyeob, second from right, celebrates with his teammates after scoring a goal in injury time of their friendly match against Saudi Arabia on Sunday in Sydney, Australia. After an own goal by Osama Hawsawi in the 68th, the Taegeuk Warriors won the match 2-0. [NEWSIS]

The Taegeuk Warriors won their friendly match against Saudi Arabia in Sydney, Australia, on Sunday 2-0 in their last friendly before the Asian Football Confederation’s Asian Cup starts.

In the scoreless first half, the most remarkable player was Son Heung-min, who fired four out of the team’s five goal attempts and even smashed the crossbar with one of them.

The tie was broken in the second half. Son had a free kick from the left side in the 68th and Saudi’s Osama Hawsawi tipped the ball into the net by mistake. Korea disappointed the Middle Eastern country as Lee Jeong-hyeob scored another goal in injury time, proving new manager Uli Stielike’s discerning eye.

It has been only four months since the 60-year-old German Manager took over at the national team, but he appears to have adapted to Korea already.

He often eats local food and even made a New Year’s greeting in Korean on Dec. 31, saying, “We’re in Australia. Happy New Year. Thank you.”

“When [the Korea Football Association] delivered briquettes in a voluntary service, he was the most enthusiastic person,” said Lee Yong-soo, chief of the association’s technical committee. “I could see he was genuine when he talked to an elderly woman who lives alone in a tiny studio via his translator.”

And at the national team, he has also chosen to be a friendly leader.

“I thought he was a reserved man,” said midfielder Son Heung-min. “I once fell down in a training session right in front of him, and he lightly tapped my hip with his foot. I was puzzled at first, but I later figured out that he was just trying to be intimate with players.”

But it’s also true that Stileike is a typical German manager, who is exhaustive about his job. When there are training sessions, he arrives half an hour early to prepare.

“German managers usually prepare meticulously from the beginning,” said defender Park Joo-ho, who plays for Mainz 05 in the Bundesliga, “and he is a typical German, too.”

Stielike’s hands-on approach seems to be slowly but steadily changing the national team.

“He has set up a definite purpose and course of action,” said Lee Yong-soo, who was one of the people who convinced Stileike to come to Korea. “But he is also cooperative and tries to listen to what others say in meetings.”

The German has insisted that the team must become more flexible. Under his predecessors, the Taegeuk Warriors had little variety in their tactics, which made their play monotonous. But Stielike claims, “The most important thing in football is to win, and it is hard to win without a variety of strategies.”

Because of this, he has experimented with different plays in each of the four friendlies the team has had since September. And during training, he has also applied his unique methods.

In a weeklong session in Jeju last month, he made the players scrimmage with two balls on half a field, which he said would help them become more prepared for unexpected situations in a game.

“I did not know training sessions could be this fun,” said Lee Jeong-hyeob, a first-time national team member.

Though the Taegeuk Warriors won their fifth exhibition match under the German against Saudi Arabia 2-0, the Asian Cup will be a bigger challenge.

“It is important to gain a good result from the Asian Cup, but it is also important to decide which style we are going to choose,” Stielike said in Australia on Saturday. “I’m going to change the team so that they become more aggressive and bold.”