Australia, Korea will fight for top spot in Group A

Australia, Korea will fight for top spot in Group A 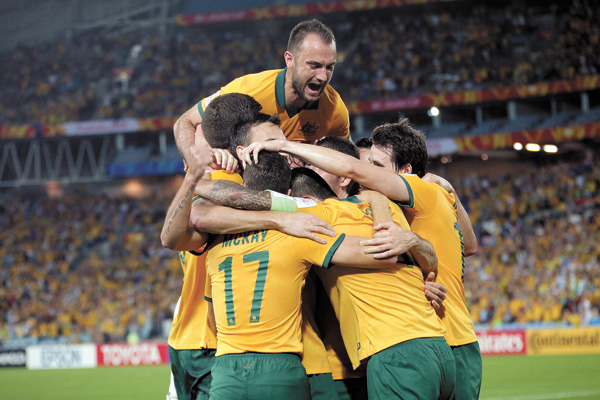 Members of Australia’s national team celebrate a goal during their Group A match against Oman at the AFC Asian Cup in Sydney, Australia, on Tuesday. Australia won 4-0. [XINHUA/NEWSIS]

After qualifying for the quarterfinals in the Asian Football Confederation’s Asian Cup, the Korean national team flew to Brisbane on Wednesday to prepare for its last Group A match against the host country Australia, which will determine the group leader.

As the Socceroos top the group with a goal difference of seven, the runner-up Taegeuk Warriors must win on Saturday to rise to first place in the group and meet the second-place team of Group B in the quarterfinals. If they place second in Group A, they must play the winner of Group B, which contains Uzbekistan, China, Saudi Arabia and North Korea.

Australia and South Korea last played each other in July 2013 in the East Asian Cup, when they drew 0-0.

In FIFA rankings, Korea, 69th, is ahead of Australia, 100th, and the Taegeuk Warriors have a 2-1-2 record against the team since 2001. But either side stands a good chance of winning.

In the Asian Cup, the teams’ performances have been very different. While Korea struggled to win both of its group matches, pulling ahead 1-0 against Oman on Saturday and scoring the same against Kuwait on Tuesday, Australia scored four goals in each of its matches. Each of the Socceroos’ goals were scored by a different player, showing that they have a lot of options on the field.

In the opening match between Australia and Kuwait on Friday, Kuwaiti defender Hussain Fadhel netted the first goal, but Australia reversed the match 4-1 with goals by Tim Cahill, Massimo Luongo, Mile Jedinak and James Troisi.

On Tuesday, Australia kept its lead in Group A by beating Oman 4-0. Matt McKay, Robbie Kruse, Mark Milligan and Tomi Juric scored in that game.

South Korea cannot overlook the fact that Australia is thriving with its home-field advantage. Though the Socceroos have gone 1-8-2 in international matches since the beginning of 2014, their most recent home loss was against Kuwait in March 2009. Since then, Australia has gone 16-0-5 at home.

The host country will also benefit from the stadiums being filled mostly with their fans, making a difficult environment for their opponents.

Making matters worse, Korea’s Manager Uli Stielike must decide whether to send in the players who were shown a yellow card in Tuesday’s match. Defenders Jang Hyun-soo and Cha Du-ri and midfielder Nam Tae-hee were given a yellow card and another on Saturday would mean they can’t play in the quarterfinal match.

The penalties are expected to considerably affect the squad because midfielder Lee Chung-yong already had to drop out of the tournament after receiving a hairline fracture in his right tibia and key players Son Heung-min, Koo Ja-cheol and Kim Jin-hyeon all currently have a cold.

If Korea draws or loses on Saturday, they will face the leader of Group B. At first, Uzbekistan, which leads the group in terms of its FIFA world ranking, was expected to be the leader.

But China is currently ahead after it defeated Uzbekistan, 2-1, in its second group match on Wednesday and beat Saudi Arabia, 1-0, on Saturday.

But coming in as the runner-up in Group A also has a bright side. The team that tops the group must head to Melbourne, 1,700 kilometers (about 1,000 miles) from Brisbane, for the quarterfinal match on Jan. 22. The runner-up will stay in Brisbane.