Golfer An is off to good start in European Tour

Golfer An is off to good start in European Tour 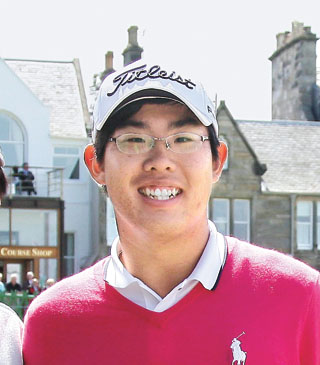 Professional golfer An Byeong-hun finished the Abu Dhabi HSBC Golf Championship, his debut tournament of the European Tour, tied for 12th place at 12-under 276, which he says gave him the confidence he needs to make it through his first year in Europe’s top tour.

An, ranked 176th in the world, has played in several competitions in the European Tour while participating full time in the continent’s second-tier Challenge Tour for the past three years. The HSBC Championship, held from Thursday to Sunday, was his first game since he became fully seeded in the top-tier tour.

“It is my best performance in the European Tour,” he said. “I’m very satisfied given that this is just the start, and I wish I could do better in the remaining tournaments.”

The 23-year-old birdied in five holes on the first day, tying for eighth with several others including Rory McIlroy, but his record plunged on the next day, when he hit 3-over 75.

An bounced back in the third round. He had birdies on the eighth, ninth and 10th holes on Saturday and made his first ace ever in the 15th round, climbing to 16th place. He recovered to 12th place at 3-under 69 in the final round on Sunday.

“This time, I want to give myself 90 out of 100 points,” An said. “Even though I failed to join the top 10, my performance throughout the tournament wasn’t bad and I even had the first hole in one in my life.”

The winner of the HSBC Championship was Gary Stal, a French golfer, at 19-under 269. He went 7-under 65 in the final round and pushed top-ranked McIlroy to second by a stroke.

An has been in the spotlight since starting out in amateur golf. With table tennis superstar parents Ahn Jae-hyung and Jiao Zhimin, he surprised the world by becoming the youngest winner of the United States Amateur Championship in 2009.

But An had to come to terms with the toughness of the professional league after making his senior debut in 2011. He spent his first three years in the second-tier league. He ranked 82nd on the money list in 2012 and 25th in 2013. Then he went up to third on the money list after winning the Rolex Trophy last year and qualified to join the European Tour.

“Spending years in the Challenge Tour was tough,” he said, “but I was not disappointed because I felt I like was steadily getting better, and look at where I am now.”

An seems to have what it takes to become a top player. At 6-foot-2 and 192 pounds, he has long tee shots and accurate iron shots. He was gifted with perseverance and a strong will to win by his Olympic medalist parents, who represented their respective countries in the 1980s. The only thing he lacks now is the experience, which he will get plenty of this year in the European Tour.

He said that his goal for this year is to remain seeded for the European Tour by placing within the top 110 on the money list in the competition.

“I’m quite confident because I have already experienced fierce competition for three years in the second-tier tour,” he said. “The European Tour has much more difficult courses, but I will try to keep to my playing style and achieve my goal.”