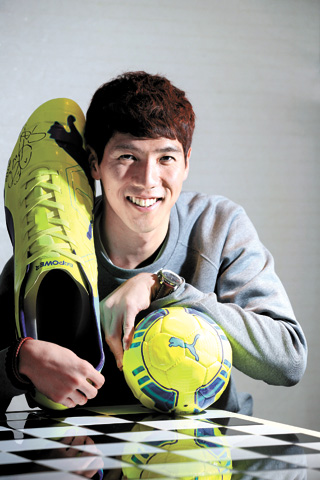 
After 17 years of playing professional football, Kim Jin-hyeon of Cerezo Osaka has finally seen his efforts pay off as he is now the national team’s starting goalie. In the Asian Cup in January, Kim started five out of six games and kept four of them scoreless, only allowing two goals in the final against Australia.

As well as some superb saves in the tournament, Kim was recognized for the accuracy of his goal kicks to his teammates down the field, which help the team build its attack. He even comes out of the penalty box to stop counterattacks, which failed once and nearly cost him a goal against Iraq in the group stage. The mistake got him the nickname “Neuer” after the German goalkeeper, who also often defends outside the penalty area.

This past year hasn’t been easy for Kim. His club Cerezo Osaka was relegated to Japan’s second-tier league in December, but he had to come to Korea immediately to undergo intense competition for a spot on the national team.

When he met with Ilgan Sports for an interview on Tuesday, he looked emaciated.

“I have lost eight kilograms [17 pounds] recently because of stress,” Kim said.

Q. You attended the Asian Cup right after the season ended in Japan.

A. I had to play again when I was supposed to rest after the season. I was overworked during the Asian Cup, and I think it is going to take a while to fully recover. But I did have a very happy time last month.

How do you feel now that you’re the team’s starting goalie?

It took me 17 years to become the national team’s starter. I was stressed before the tournament because I thought I had to do impossibly well. I never thought I would feel that much pressure at one time, but it helped me a lot advancing my football career.

You only allowed a goal in the final match.

Yes. I knew the media was reporting that I gave up no points before the final. So I did not read the articles online and tried to stay calm, reminding myself that the ball is round and I have to allow a goal sooner or later. But I was so disappointed after losing the first goal to Australia, probably because we lost a point when we were threatening enough to score the first goal.

Son Heung-min’s equalizer must have been a relief for you.

I could not believe it. And I thought we got 30 more minutes thanks to Son.

In the group match against Iraq, you were given the nickname “Neuer.”

Iraq was on a counterattack, and I ran out of the penalty area to clear the ball. But it was my mistake because I should have guessed how the ball was going to bounce or noticed how the Iraqi players were coming at me. Cha Du-ri cleared the ball instead and roared at me, “Why did you come out? Focus on the game.” I was trying to help the defenders, but it didn’t do any good for the team. Even the youngest, Son Heung-min, joked with me, calling me Neuer.

People consider you to be an offensive goalkeeper with decent kicks.

I’m a goalie, but I still think ball-handling techniques are very important for goalies. The football team at my high school [High School Attached to College of Education of Dongguk University] wasn’t very strong, so the coach encouraged us to make goal chances from goal kicks. I had to train myself to kick farther and accurately at the same time. I later became confident in my kicks, and I still practice long kicks for 30 minutes a day even after turning professional.

Were you stressed about kicking the ball accurately in the Asian Cup?

I was. And I sometimes made mistakes because I felt too much pressure to kick the ball accurately to my teammates, and the mistakes made it even more difficult for me to pass. But I did not want to just kick the ball to the middle, and I tried to get the ball toward our midfielders or strikers on the flanks. Maybe that was also why the ball often went off to the sidelines.

Why did you decide to stay at Cerezo Osaka after the team was relegated?

I wanted to be responsible for the team’s relegation, and it also hurt my pride because the team that I was keeping a goal for went down. And I didn’t want to entertain the idea of leaving the team.

What is your next goal?

First, I want to stay on the national team. I used to just be a tall guy when I went out in public and some people thought I was a volleyball or basketball player. I’m still not used to being recognized by people or seeing my name on the news. Playing with my teammates Diego Forlan and Cacau in Osaka has led me to think it would be great to be Korea’s first goalie in Europe.